The big picture is what strikes you first.

The huge, tawny-brown rock faces with gaping niches where the Bamiyan Buddhas stood until the Taliban destroyed them. The adjacent rows of caves like church windows overlooking dark green fields of potato plants with pinkish-white flowers. The towering mountains, some capped with snow in midsummer.

Then you start to look at the details. A toddler sitting by the open water course in town, dipping an aluminium cup and drinking. You know that water’s polluted, you know he’s at risk of dysentery or worse. The family walking through the fields at dawn, the little boy doing a zig-zag skip along the track. Three teenage girls in regulation white school headscarves, walking down a dirt road blowing bubblegum. 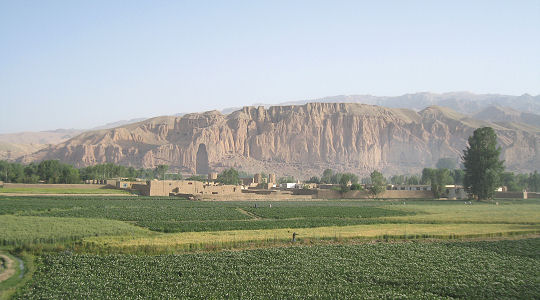 Bamiyan is at once the most developed and the least developed province in Afghanistan. Here, nearly half the girls go to school – that’s way more than in Pashtun areas, like Helmand in the south. They even have a female governor – the only one on the country.

There are projects, many funded by NGOs, to train mid-wives and female teachers. The Hazara people are relatively liberal, and all the girls we spoke to were very sure that men and women were equal and they had the right to follow any profession they wanted.

But the poverty is desperate. Only four miles of tarmac road in the whole province. No mains electricity, not even in the provincial capital. Most houses have dirt floors. Children collect water from springs, loading up donkeys with jerry-cans, while women wash clothes in the streams which flow past their pale brown wattle-and-daub homes. 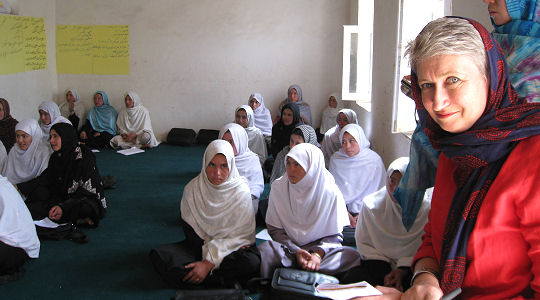 The governor, Habiba Sorabi, says that after five years of lobbying, at last she’s managing to attract significant donor funding. The Japanese are paying for a paved road from the provincial centre to the town of Yakawleng, while the Americans are tarmacing the road to Kabul, hopefully reducing the journey from eight to three hours. But we’re nine years into the NATO intervention in Afghanistan – how many of those years were wasted?

Govenor Sorabi says that part of the problem is that governments like the British concentrate their development aid in violent provinces like Helmand where they want to win hearts and minds.

In Bamiyan, the hearts and minds are already won – the Hazaras were victimised by the Taliban, so they see the foreigners as their protection. But their support for the international presence doesn’t seem to have got them very far.

The white flowers which make the countryside so beautiful are potatoes not poppies, so no need for funds to counter narcotics. As one aid worker put it cynically: “No violence, no poppies, no development.”

But I found no bitterness in Bamiyan either.  Everyone we met welcomed us. We walked through the bazaar chatting to people and teasing the children – now that’s something you can’t do in most Afghan towns these days. People came rushing up to practice their faltering English. I don’t mean to sound dewy-eyed, but it was like being transported to an idealised Afghanistan, the way it could have been, or should have been.

But it isn’t of course, not beyond Bamiyan. And on the roads leading into the province there are increasingly frequent insurgent attacks.  The Hazaras of Bamiyan, especially the women, are worried that they’ll be sold down the river by an international community rushing for the exit.

They know they’re easy to sacrifice in any deal with the Taliban.

So I left Bamiyan heartened by spending a little time in a beautiful part of Afghanistan, where people are working hard to overcome the legacy of conflict and neglect, but fearful for their future.