Letter from a refugee: ‘I feel as though I can’t continue any longer’

Refugees held inside Darwin’s Northern Immigration Detention Centre told members of the Darwin Asylum Seeker Support and Advocacy Network on May 3 of two recent suicide attempts by inmates.
The network has also received two letters from detainees. One of these letters, from a Rohingyan man held in detention for 18 months, appears below. 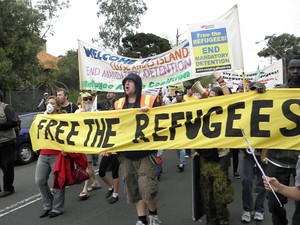 The network’s Carl O’Connor said: “These letters and the reports of suicide attempts indicate that people inside Darwin detention centres are at breaking point. Community detention is cheaper and more humane than locking people, including children, in detention centres for inordinate lengths of time.
“These people are fleeing some of the worst regimes in the world, they should not be subject to further punishment when they seek asylum in Australia.”
I am a Rohingya. An oppressed, stateless people from Burma. The Burmese military has long oppressed Rohingyas and has been involved in an ethnic-cleansing pogrom to prevent the creation of a Rohingyan state.
My life in Burma was very hard. My family house was demolished three times by authorities and as a result we have move to my mother’s native village. Every person in that village was subject to violent abuses, fines, extortion, military harassment and corporal punishment. I am aware that at least 100 villagers are still in detention and many have died in detention
My father was died for the subsequent detentions. My siblings detained in 2008. After I passed matriculation, I sneaked out Arakan to Rangoon to continue my study. If I did not go leave in secret my family would have had to have paid a large bribe, which they could not afford.
In Rangoon, I was involved in research into the natural resources, as a [result] of my research I was harassed, beaten and detained by government authority. My colleagues managed to released me through a bribe.
To avoid further punishment, I escaped Burma to Thailand. In Thaliand, I survived by selling bread. I could not stay long Thailand because of tension directed towards Burmese people.
I then went to Malay border. In Malaysia, I was detained many times as Rohingya people bounded a constant cycle of humiliation, harassment and abuses. I was involved with Rohingya refugee organisations and Burmese political opposition groups based in [Kuala Lumpur]. I worked odd jobs in mechanical and electrical works.
Once I was detained, I sold by corrupt immigration officials to people smugglers. I was then sold to a large fishing boat and forces to work at the threat of being shoe at sea on the fishing boat. I managed to escape the boat when it came into land to collect ice and I run from the boat and away from the boat.
In order to avoid further persecution, I came to your country via a risky boat journey from Indonesia. We a group of ten Rohingya reached Ashmore Reef on 29 Dec 2009 and for the first time no fear for any more persecution.
was happy as I was sure I would find safety in Australia. I was found to be genuine refugees by DIAC since the end of May 2010. Since that time, I have been waiting for my security clearance. I am provided with good accommodation and food in detention in Australia, some officers here are willing to listen my cases. My life in detention, however, is very hard on my mind. I have been detained for 18 months. This makes me very depressed and I am tired by enduring the physical and mental pains as a result of my detention. I have to take medicine for that.
I feel as though I can’t continue any longer to be detained like this. I have received many promises in detention. I was told in November 2010 that I should wait until the Christmas festival to be free. I was told many times that we many be able to be moved into community detention and be able to live free whilst I wait for my security clearance.
On March 17, the government notice told everyone that their security clearance would be completed by April. I and my friends were happy to hear this news after a long wait. I was told that us Rohingyans would be a priority case. I waited all of April for my clearance and have now been informed recently that it will be delay again.
I feel like sailing with hopeless and isolated and I am an innocent refugee. I have been asked to go to a different country so I can escape this pain but this can’t happen. I do not know how long I will have to suffer from this indefinite detention. I have seen some friends attempted suicide including by setting themselves on fire.
I had to help move a friend down from a tree after he attempt to hang himself with a sari. A friend has banged his head a large number of times against a wall. Some have cut themselves.
I am trapped for an unknown reason. I am not a terrorist. I do not support terrorists and hate terrorists and my family have been the victim of many terrorist incidents from the Burmese authorities.
I should not be detained for being a refugee. Therefore, I would like to approach the Australian communities to come together to call Australian government to look kindly into the matter and why its notice is undermined.
Respectfully,
Longtime detainee Burmese refugee asylum seeker
NIDC, NT