YAKAOLANG, Afghanistan — The white-bearded elders of Bedmushkin tremble when they recall Jan 8. That was the day that Taliban fighters came to the village after having won a difficult battle against a militia of the ethnic Hazaras who inhabit this harsh, mountainous center of Afghanistan. 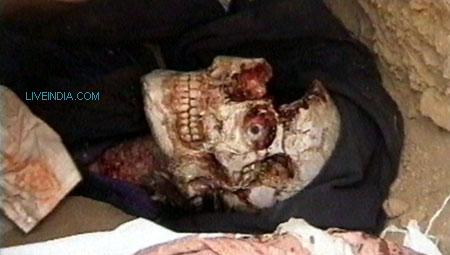 The Taliban swept through the village and rounded up 37 Hazaras — farmers, laborers and other civilians. They tied the men’s hands and marched them up to Yakaolang, the district’s main town.

When they arrived at the gully above the hospital, the day’s killing already was under way, for the bodies of 12 men from another village lay bloody on the snow. The Taliban pulled aside the most elderly men from Bedmushkin and “gathered the younger men before our eyes,” recalled Syed Hassan, a 67-year-old farmer.

“They tied their hands with their turbans and tied them together, shoulder against shoulder. They insulted us all, calling us Shia kafirs,” or infidels.

“We were looking upon our sons and our brothers’ sons, and calling upon God that this should not happen,” said one of the elders, Syed Haji Ghulam Hussain. But Taliban with automatic rifles stepped toward the bound men and opened fire.

“Our minds were spinning with grief and cries. We don’t remember how many men were shooting or how long it took,” Hussain said. Then “our sons were lying on the ground in their blood, and the Taliban walked up and shot each one again in the head.”

When it was over, 29 young men from Bedmushkin were dead, and the Taliban forced the elders to throw their sons’ bodies into a truck to be hauled away. The somber grandfathers of Bedmushkin recounted the killings last week beside the mass grave where they buried the 35 village men who ultimately died in the Taliban’s rampage in January.

“We have perhaps 400 people in our village,” said Hassan. The loss of more than a quarter of their adult men has left many families struggling to survive, villagers said.

In the five years of Taliban rule over most of Afghanistan, the bitterest warfare and deadliest atrocities were those between the Taliban, drawn mainly from Afghanistan’s dominant Pashtuns, and the minority Hazaras, set apart from other Afghans as followers of the Shiite branch of Islam and historically the most downtrodden of the country’s ethnic groups.

Nowhere was such violence more continuous and destructive than in Yakaolang, an isolated district that changed hands through combat eight times in the last three years.

After January’s massacres, in which the Taliban killed an estimated 300 Hazara civilian men over several days, Yakaolang caught the attention of U.N. Secretary-General Kofi Annan and international human rights groups, all of whom called for a full investigation. U.N. officials who investigated the massacres described the atrocity as a Bosnia-style war crime that merited prosecution in international courts.

A recent visit to the valley offered signs that the Taliban were pursuing a policy designed not simply to defeat Hazara fighters, but to drive out the population.

In January the Taliban rampaged through Yakaolang after re-taking it from the troops of Hezb-i-Wahdat, the largest Hazara party and militia. But the Taliban held the district for only 40 days before Wahdat seized it back. When the Taliban returned in May, they executed 26 more civilians and burned much of Yakaolang town and villages in the district, residents and local officials said.

“Each time the Taliban came, they were more severe,” said Mohamed Reza Sayedi, the Yakaolang district’s governor. “In May their fighters burned houses and food stocks of the people, to make sure that no one could live here,” said Sayedi, who served as governor under both the Taliban and Wahdat.

Now parts of Yakaolang and other districts in the Hazarajat are dead zones.

The Shahidan valley, about 35 miles east of here, is lifeless, its fields left fallow and villages silent except for the wind rustling in dry grass. There, too, the Taliban burned homes and arrested or killed civilians amid see-saw battles with Wahdat.

In the valley’s biggest town, Bazaar-i-Shahidan, Ghulam Khojain was one of only three people visible one recent day. The bazaar’s former shops were empty but for charred timber and the debris of collapsed roofs. Last winter the Taliban arrested Khojain with 84 other people from the valley. “They said we were working for America and Iran, and getting paid to support Wahdat,” Khojain said. “They put us to work as prisoners and beat us if we did not do enough for them. They killed six of us.”

Until a couple of weeks ago Yakaolang town was also empty. But the Taliban withdrew from Hazara areas following the fall last month of Mazar-e-Sharif, to the north, so people have been streaming back from their places of refuge — overcrowded Hazara communities in Kabul or other towns, relatives’ homes, mosques and even caves in the nearby mountains.

There is not much to come home to. In Yakaolang, too, the bazaars are burned. The hospital is destroyed. Pastures are empty of the usual sheep and cows, because many people had to sell their livestock to pay for their refuge in other parts of Afghanistan. With their houses damaged and livestock and food reserves gone, many of Yakaolang’s people face a grim winter.

The Taliban troops who burned Yakaolang in May were led by Mullah Dadaullah, a commander whom Wahdat officials and a U.N. report described as infamous for having uprooted or executed civilians and destroyed farms and villages in earlier campaigns. Dadaullah — who has close clan ties to the Taliban leader, Mullah Mohammed Omar — was a commander of the Taliban forces besieged at Kunduz last month. He ultimately surrendered to the anti-Taliban Northern Alliance, said Mohammed Ghiasi, the Wahdat security chief in Yakaolang.

Dadaullah’s offensive in May “included a lot of Arab and Pakistani troops, which Taliban had the habit of using in our areas,” said Ghiasi. They burned more than 1,000 homes around Yakaolang town, he said. The 12 to 15 Taliban fighters who raided Bedmushkin and arrested its men for execution “included several Arabs and others who we think were Pakistanis, whose language we did not know,” said Hassan, the farmer.

The brutality of the Hazara-Taliban conflict has been rooted partly in the special antipathy that the Sunni Muslim Taliban and their Arab allies have for Muslims of the Shia sect.

“Some of us saw and heard the Taliban putting up their hands (in prayer) after shooting Hazaras and saying, Let this sacrifice be accepted by God as our jihad against the unbelievers,”‘ said Syed Mohammed Ali, one of the elders at Bedmushkin.

“They do not regard us (Shias) as people,” said Ahmed Hussain, another Bedmushkin resident.