AFSHAR AND THEN NOTHING ELSE

Published in Salsaal on Wednesday the 14. of February 07

My two brothers were killed at Afshar. One of my brothers was killed beside the shrine of Shahid Ismael Balkhi as the result of shooting from Kafar-Koh a month before the Afshar massacre while he was carrying a wounded child to the hospital and the other was killed in the Afshar massacre. I will not forget my brothers’ murder till the day of my death. We will never forgive the murderers. If the parliament of Afghanistan wants to forgive the murderers of my brothers, this will be betrayal. I will never accept it. Khan Mohammad (not his real name). Afshar village. February 11th 2007. 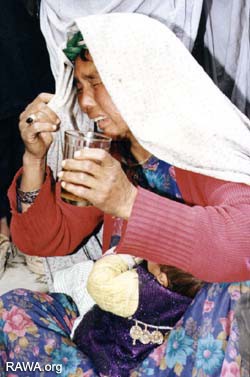 Fourteen years ago one of the most heart-rending human rights crimes took place on the 11th February 1993 in Afshar village of Kabul. The inhabitants of the village (numbering several thousand) were killed, wounded or taken capture. A small number of them remained alive. No house was left standing nor were their belongings left as they were [i.e. they were looted]. No family can be found that has not lost a member or members from it or have not spent some time in captivity. Hundreds of women were raped and hundreds of others were shot dead or were slaughtered with bayonets and were buried under tons of soil. According to a member of the investigation team of Afshar damages, there was only a detailed list of 800 missing persons despite the tightened security situation and evaluation of the damages in terms of billions of Afghanis.

Speaking of Afshar means speaking of the wildest crimes of humankind which other communities and places of the world may have experienced. However, the size and wildness of the crime is not unique in the history of Afghanistan. Afghanistan has witnessed obscene and anti-human crimes and massacres. Even within the past three decades we remember the massacres of Herat, Yakawlang, Mazar, Bamyan and the torching of the vineyards of Shamali (“north of Kabul”) but none of them were so heart-rending as the one in Afshar. Fourteen years have passed since the massacre of Afshar, but still the impact and signs may be observed. The Afshar massacre was quite different from other inhuman events in Afghanistan.

As the way the Afshar massacre was conducted was more tragic than other crimes in Afghanistan, today the heirs of that massacre are also poorer and more oppressed than any others in the community and they shoulder the pressures and wildness of the elements of the crime. The condemnation of [the massacres of] Herat, Yakawlang, Mazar and the north of Kabul is not only easy but the government of Afghanistan and the rulers also sometimes mention it. The heirs of the massacres of Herat, Mazar and Yakawlang can commemorate and celebrate in mourning ceremonies and shed tears for their victims, mourn and damn the perpetrators of the massacre.

The heirs of the Yakawlang massacre were given some condolence in financial aid and contributions were paid to the victims by non-governmental organisations. The torched houses and vineyards of Shamali and Bamyan were given help, such that if the people could not rebuild their whole house and vineyards, at least they could construct a few rooms to live in. Millions of dollars were spent on the construction of hospitals, schools, the rehabilitation of wells, improved seeds, irrigation systems and tens of other assistances by the government, charitable institutions and national tradesmen so that fortunately few signs of ruins and devastation can be found in those places. The multi-floor buildings project in Khair Khana is about to be extended to the Shamali region. These buildings are among the main achievements of the period following the fall of the Taliban. However, the ruins of Afshar still remain as the signs of crimes and massacres of the past time. The streets of Afshar are still full of many ruined houses’ soil, such that with the first glance you remember the massacre in the village. No signs of rehabilitation and improvement can be found in it. The expenditure of billions of dollars is just a fiction here; no other village or location in Kabul can be found to be in such a bad condition as Afshar village. The houses and walls of Afshar look the same as they did in 1993, but the multi-floor buildings of Khair Khana and Shahr-e Naw are wrapped in glass and increased each day. But the inhabitants of Afshar still live in neighbouring villages of Khushal Mina, Dasht-e Barchi and Qala-ye Shahada.

In the fourteenth year of the anniversary of the Afshar massacre, the last wishes and hopes of the victims of the catastrophe have also been wiped out and their voices shut in their throats. The parliament of Afghanistan approved the amnesty on the anniversary of the Afshar massacre and it took the right of punishment of the perpetrators of Afshar away from the heirs of the Afshar massacres and the revenge of the deaths of thousands of murders, billions of Afghanis of damages and the rape of hundreds of women was covered by the 12th article declaration of amnesty by the representatives of people in the parliament.