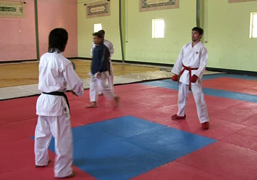 The Afghan national Shotokan Karate team has been continuing accelerated training to get prepared for these games in the past two months.

Six karate players, including two females will represent Afghanistan in the 16th round of Shotokan Karate Asian Cups planned to be held in China.

Hussain Ali Rezayi, Fazl Ahmad, Ahmad Hussain Hussaini and Sayed Mohammad Amiri in the men’s section and Marzia Bayat and Hamida Hussaini in the women’s section will play against their competitors in these matches.

“We are joining these matches to get a medal. We have good from a fitness point of view and we hope to have achievements in these matches,” said one of karate players to TOLOnews reporter.

The 16th round of Shotokan Karate Asian Cups will start within two weeks in Guangzhou city of China. The city will host 28 different matches, and participants in 13 different games will represent Afghanistan in these matches.