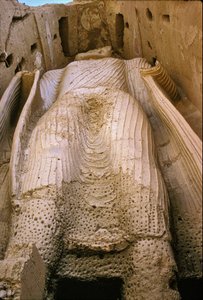 The Buddhas of Bamiyan were two 6th century monumental statues of standing buddhas carved into the side of a cliff in the Bamiyan valley in the Hazarajat region of central Afghanistan, situated 230 km (143 miles) northwest of Kabul at an altitude of 2500 meters (8,202 ft). Built in 507, the larger in 554, the statues represented the classic blended style of Gandhara art.

The main bodies were hewn directly from the sandstone cliffs, but details were modeled in mud mixed with straw, coated with stucco. This coating, practically all of which was worn away long ago, was painted to enhance the expressions of the faces, hands and folds of the robes; the larger one was painted carmine red and the smaller one was painted multiple colors.

The lower parts of the statues’ arms were constructed from the same mud-straw mix while supported on wooden armatures. It is believed that the upper parts of their faces were made from great wooden masks or casts. The rows of holes that can be seen in photographs were spaces that held wooden pegs which served to stabilize the outer stucco. 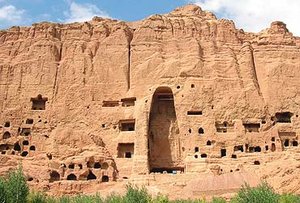 Bamiyan lies on the Silk Road which lies in the Hindu Kush mountain region, in the Bamiyan Valley. The Silk Road is a caravan route linking the markets of China with those of Western Asia. Until the 11th century, Bamiyan was part of the kingdom of Gandhara. It was the site of several Buddhist monasteries, and a thriving center for religion, philosophy, and Indian art. It was a Buddhist religious site from the 2nd century up to the time of the Islamic invasion in the 9th century. Monks at the monasteries lived as hermits in small caves carved into the side of the Bamiyan cliffs. Many of these monks embellished their caves with religious statuary and elaborate, brightly colored frescoes. 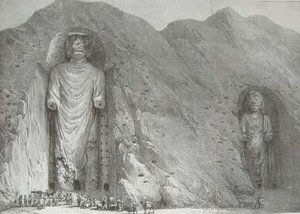 The two most prominent statues were the giant standing Buddhas Vairocana and Sakyamuni, identified by the different mudras performed, measuring 55 and 37 metres (180 and 121 feet) high respectively, the largest examples of standing Buddha carvings in the world. The larger figure was also said to portray D?pankara Buddha. They were perhaps the most famous cultural landmarks of the region, and the site was listed by UNESCO as a World Heritage Site along with the surrounding cultural landscape and archaeological remains of the Bamiyan Valley. 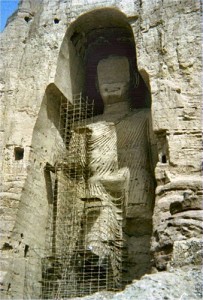 The smaller of the statues was built in 507, the larger in 554. They are believed to have been built by the Kushans, with the guidance of local Buddhist monks, at the heyday of their empire.

They were intentionally dynamited and destroyed in 2001 by the Taliban, after the Taliban government declared that they were “idols” (which are forbidden under Sharia law). International opinion strongly condemned the destruction of the Buddhas.

The destruction of the Bamiyan Buddhas became a symbol of oppression and a rallying point for the freedom of religious expression. Despite the fact that most Afghans are now Muslim, they too had embraced their past and many were appalled by the destruction.

Though the figures of the two large Buddhas are almost completely destroyed, their outlines and some features are still recognizable within the recesses. It is also still possible for visitors to explore the monks’ caves and the passages which connect them. As part of the international effort to rebuild Afghanistan after the Taliban war, the Government of Japan and several other organizations, among them the Afghanistan Institute in Bubendorf, Switzerland, along with the ETH in Zurich, have committed to rebuilding, perhaps by anastylosis, the two largest Buddhas.

On 8 September 2008 archeologists searching for a legendary 300-metre statue at the site of the already dynamited Buddhas announced the discovery of an unknown 19-metre (62-foot) reclining Buddha, a pose representing Buddha’s passage into nirvana.

Historic videos of the Buddhas: