It took me over an hour to get to Marefat School, far out on the outskirts of West Kabul. Once I was there, I didn’t want to leave. 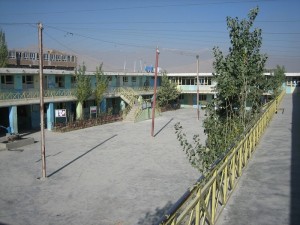 Marefat is a school in a very poor Hazara district of Kabul. The school started, as so many education programs did, in the refugee communities in Pakistan during the 1990s. When it relocated to Kabul, it had 150 students. Today it has over 2,400. 40% of them are female. They also run an adult literacy program.

Most people have now heard about the plight of Hazaras in Afghanistan, even if it’s just from reading the Kite Runner. They are spit on by practically every ethnic group in the country, and were ruthlessly tracked down and killed during the Taliban regime. Their community is a model of restraint and dignity in the face of racism and oppression.

My guide was Abuzar Royesh, a young guy who did a year of high school in Minnesota. He’s whip smart, and is currently applying for scholarships at Ivy League schools.

Marefat puts the lie to any notion that Afghans are inherently less democratic, progressive, intelligent, or compassionate than Canadians or any other culture. The school originally had programs in human rights, economics, anthropology, political science–however, to allow their students to write the university entrance exams, they had to register Marefat officially with the Ministry of Education.

The strongmen who currently control that ministry forced the school to abandon all those programs, because they weren’t part of a recognized curriculum. Marefat also used to have mixed gender classes; the MoE forced them to segregate boys from girls in exchange for registration.
The school is run by a board of trustees, elected by the community. Here is the boardroom, ringed by photos of great thinkers painted by the students.

The school receives no funding from the Afghan government. Younger students pay $120 for a year’s tuition; older students pay $170. There is a support fund available for families too poor to pay. The school also relies on donations.

Here is the school’s library. They are in the process of building a much bigger one.

Here’s the art space. The school is filled with the paintings of students. 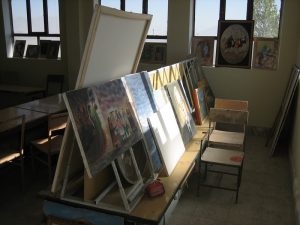 Marefat runs an extensive English language program as well, funded in part by the American Embassy. Students who have been there for a couple years can easily carry on a conversation with you.

I chatted with this classroom full of guys. This was a physics class, and they were telling me about their preparations for the 5-hour university entrance exam. Marefat students have a 99% success rate.

The girl’s section is in a different building which Marefat has constructed themselves. Here’s the alleyway to get there.
I popped in on an English class, and chatted with the girls. Ringing the bell for a recess: 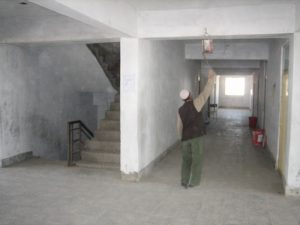 The upper floor is under construction right now. They will eventually move all their offices there to make more classroom space below.

For the most part the school is quite safe, save for one notable exception. Last year, when Sheikh Mohseni (who I touched on here) wrote the Shia Personal Status Law, a horrifically regressive document that outlines all the ways in which men can subjugate their wives, Marefat organized a response to it. Hazaras are the only major Shiite group in Afghanistan, so this law was going to take a particular toll on them.

Mohseni’s mosque sent a mob that descended on the school. They physically threatened the students and demanded the head of the school’s principal, Aziz Royesh. Aziz barred the door to his office and managed to escape through a window.

From the roof of the school, we looked out over the sprawling slums of Kabul. It’s amazing that out of such poverty comes a school as stunningly beautiful as Marefat.