BAMIYAN, Afghanistan — They stand like missing hearts carved out of the mountain’s chest, abandoned chambers where ancient wonders of the world once gazed placidly.

It’s been nearly 10 years since the Taliban destroyed Bamiyan’s towering Buddhas. With Afghanistan convulsed again by war, rebuilding isn’t even on the agenda.

No one knows how much it would cost to restore the work of craftsmen who’ve been dead for more than 1,500 years, and “nobody’s ready to pay,” said Hamza Youssefi, of Afghanistan’s Historical Monuments Department.

Youssefi sold tickets at 300 afghanis, about $7, for the visiting foreigner, and 60 each for two Afghan colleagues. His office is tacked with posters explaining what used to be here. Down a dim hallway, locked cabinets contain recovered bits of statue.

We walked in the autumn afternoon sun toward the smaller of the two main alcoves, which held the female Buddha, 118 feet tall. The male figure was 174 feet tall.

Tourists avoid Afghanistan now, and only a handful of foreigners were about. Three small Afghan boys chased a black goat that got away. Magpies fluttered.

The Taliban committed atrocities, both human and cultural, against Bamiyan’s ethnic Hazaras. Ignoring global pleas, they destroyed the Buddhas in March 2001, first trying mortar and artillery, then succeeding with dynamite, claiming them to be an affront to their conservative Islamic faith. Some say they hoped to find gold in the statues’ bellies.

We walked up a dizzyingly steep staircase that the ancients carved beside the Buddha, now modernized with handrails made of rebar, and looked out across the valley, imagining it in the sixth century. Like ghosts, snatches of intricate paintings can be glimpsed in hollowed-out chambers.

The Buddhas of Bamiyan haven’t been forgotten. Under the auspices of the U.N. Educational, Scientific and Cultural Organization, European and Japanese archaeologists have stabilized the cliff face, which was damaged in the explosion; surveyed the honeycomb of caves; and preserved pieces of the original statues. 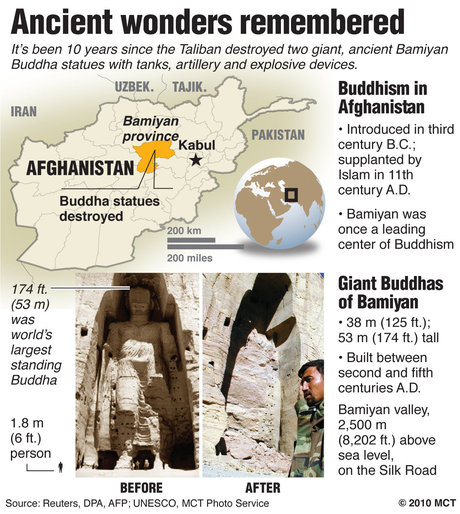 They’ve discovered previously unknown oil paintings in the complex and a stupa, or Buddhist shrine, at the base of the cliff, said Habiba Surabi, the governor of Bamiyan province.

Large fragments are tightly wrapped in yellow plastic at the mountain’s base. Scaffolding fills the main chamber, like the skeleton of a Buddha. But with Afghanistan’s war and poverty, finishing the work isn’t a job for today.

Unlit lights are strung across the scaffolding. In the Dari language, they spell out: “Peace.”