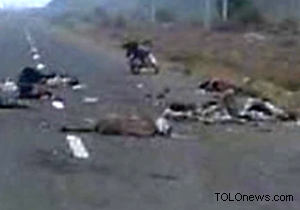 TOLOnews has obtained a video clip showing some dead and wounded Afghan refugees lying on the ground, with Iranian border forces standing heedlessly by their side.

It is not clear when the footage has been recorded and who has recorded it.

The Iranian Embassy in Kabul called the video clip fake and denied that Iranian border forces had mistreated Afghan refugees.

Mohammad Dehqani, in charge of media relations of Iran’s embassy in Kabul told TOLOnews: “Why does TOLO TV always air such pictures and stories? We have not even heard of such an incident, but unfortunately TOLO always airs negative reports. We strongly dismiss it.”

This is not the first incident of its kind. Afghan refugees have always complained about Iranian border forces killing and wounding Afghans attempting to cross into Iranian soil.

The Afghan Justice Minister recently said that around 5,000 Afghans are in Iranian jails 60% of whom have been imprisoned on drug-related charges.

There are reportedly around 3 million Afghan refugees currently residing in Iran.