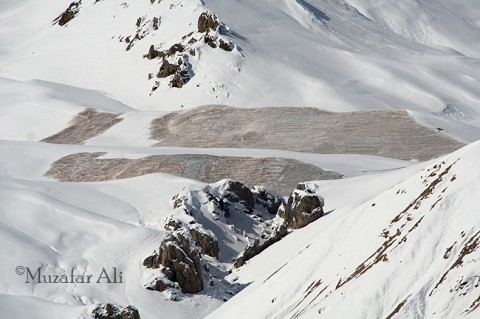 The places in above and following photos are shot from Panjao, Waras (Bamyan Province) and Ashtarlai (Daikundi Province) districts on winter 2009 and spring 2010.

In most part of Hazaristan (Central Afghanistan) winter season starts on late October and end on early March. When spring starts, snow still exists on the mountains. People just cannot wait for snow to melt down its own. Rather they spray soil on it to speed up melting process. It gives Hazara farmers a bit of time to get crops at the end of the year. A bit of laziness can earn them a severe food setback which results in starvation for their families.

Because of lack of enough land for cultivation people rely on rain-fed crops. According to the UN estimations; 70% of Sangtakht District, Daikundi Province’s crops come from rain-fed harvest. 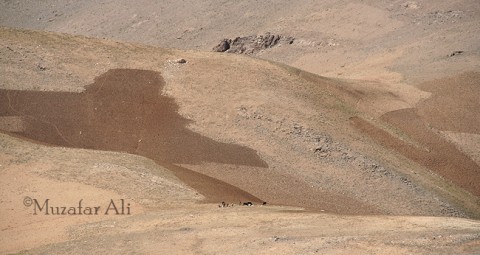 This figure is the highest among all 9 districts of Daikundi Province. As soon as snow melts down farmers step-up on the mountains with their oxes and donkeys to start ploughing. Its extremely difficult to plough on the mountain because it is steep and sometimes very dangerous. An ordinary farmer from other part of the country cannot plough in Hazaristan. 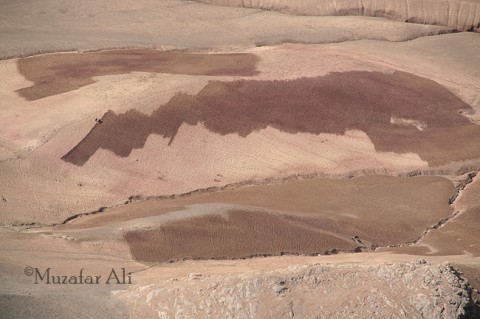 It takes farmers weeks to make extremely difficult land to ready for cultivation. Men, woman, children, all work together to get this critical task done on time.

Rain-fed cultivation is vulnerable because heavy rain, snowfall, drought, animals and birds and even Kuchis/Nomads significantly harm the cultivation.

Unfortunately the harvest is not as much as people need. Mostly people cultivate wheat, beans and other grains which they would use during the course of the year. Hence money does not circulate among people and they remain poor. Mostly they do barter shopping to come up with their needs of life.