AAP
Two asylum seekers are believed to have tried to take their own life at the Perth Immigration Detention Centre. 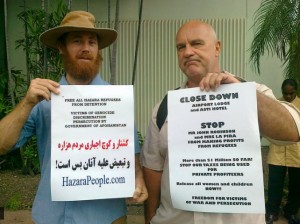 The Immigration Department confirmed that early on Monday morning two male detainees had threatened self-harm but had been stopped by centre staff.

“Neither detainees were injured and both are receiving appropriate medical checks as precautions,” an immigration spokesman told AAP on Monday.
The latest incident follows several recent cases of self-harm or attempted self-harm in Australian detention centres.

On March 28, a 20-year-old Afghan at the Curtin detention centre in Western Australia’s Kimberley region took his own life.

Refugee advocates said that after waiting many months and after more-recent arrivals were granted visas, he believed he would not get a visa to stay in Australia.

On March 16, a 20-year-old asylum seeker, also Afghan, was found dead at the Scherger detention centre in north Queensland.

On April 7, an Afghan asylum seeker was hospitalised after attempting to take his own life at the Curtin centre.

Refugee advocates say conditions at the centres and delays in processing refugee applications have increased feelings of despair and the risk of self-harm among detainees.

* Readers seeking support and information about suicide prevention can contact Lifeline on 13 11 14, or Suicide Call Back Service 1300 659 467, or Multicultural Mental Health Australia (www.mmha.org.au).