On 12th September, 2011 at 1 pm a program was held under the title “Afghanistan is not what you see, Afghanistan is what you should see” by the group of students belonging to the “Flinders University Afghan Union”. The speakers talked in English.

The event opened with Afghan finger food and the audience, represented by many different countries and cultures, appreciated the talent of the Afghan people who had prepared it. 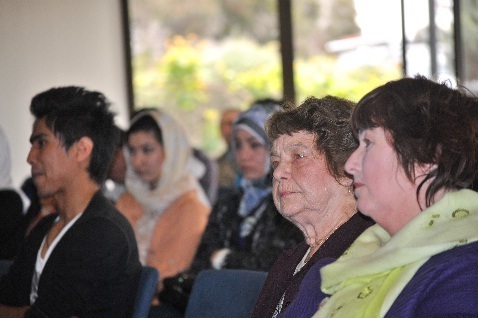 Sonia Ziaye, an Accounting graduate student, gave a brief introduction about the purpose of the event. She began with the question, “What do you think Afghanistan looks like?” which caused the audience to stop and thoughtfully consider this. From their pre-conceived ideas the audience had reason to believe that Afghanistan is a country controlled primarily by warlords. However, after Sonia had shown photos taken in the 1960s and until the present time they began to see things quite differently from what they had previously understood to be true and commented on many positive aspects revealed which are rarely covered by the media. 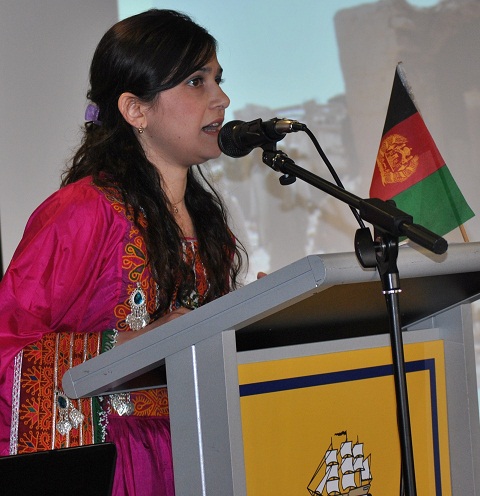 Hamed Muradi, a Medical Science student talked about the purposes and unity of the Flinders Afghan Union. He made the observation that this group represented the closeness and oneness of his people although they came from many different parts of Afghanistan. Aziza Zafari, a Medical Engineering student, was the first speaker and covered political issues and the potential for tourism in Afghanistan. She mentioned that in the last six decades Afghanistan had experienced critical political concerns such as the Russian, the Mujahidin, the Taliban and interference from neighbouring countries which had sparked many negative effects on the political and economical life of Afghan people. Then she spoke about various places of interest for tourists such as Bamyan Budha’s (‘Shamama’ and ‘Salsal’) besides naming and describing others like ‘Band Amir Lake’, ‘Panjshir Valley’, ‘Bande Qargha’, ‘Kabul Museum’, ‘Baghe Babor’, and the mosques of Afghanistan. She continued by mentioning the ‘Tora Bora’ (the black dust) world-famous cave complex, which is located in the White Mountains between Badakshan and Bamyan provinces. This was once famous as a tourist site back in the 1960s, but is presently described by the media as a home for terrorists.

Shakila Azimi, a Nursing student, was then introduced by Aziza Zafari to the audience. Shakila’s subject was the population of Afghanistan. Her research showed that since the 1960s the population of Afghanistan has increased from ten million to thirty million. She also talked about sport with the most popular sports being buzkashi, soccer and cricket and that Afghanistan had reason to be proud of champion sportsman, Ruhullah Nekpa who won an Olympic medal in 2008.

Social Work student, Zahra Hussaini, was introduced next to talk about the import/export trade in Afghanistan. The artistic and creative talents of the people are seen in the production of their colourful rugs, carpets, etc. and find a ready market in other countries and bring in high export prices. Zahra also mentioned that in 1966 dried fruits and nuts accounted for about a quarter of the export revenue. The main imports are manufactured goods, textiles, food, petroleum products and machinery.

Sara Haidari and Habiba Danish, two Medical Science students, were other speakers at the event who spoke about education in Afghanistan. Sara said that during the 1970s education was compulsory and everyone was forced to study. She also mentioned that in Afghanistan education was free and the students did not pay fees, while in every other country students must pay for their education. Next, Sara, Habiba talked about technology, art and handicrafts. She shared that in the case of technology, Afghanistan is not backward, but, like other countries, receives every kind of technology as it is produced such as mobile phones, computers, laptops etc. 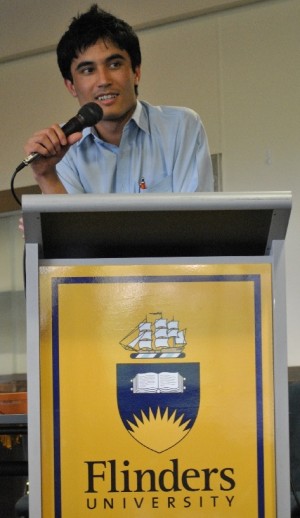 Elyas Alavi the poet and artist was invited to the event as a guest. After sharing some of his sorrows he read one of his poems, ‘Where is the homeland?’

The homeland, a wooden table
at which we drank tea
and breathed a sigh of relief
just before the immigration police caught us.
…
Tall-e Siah
Quetta
Aten
Nauru
Woomera
the homeland perhaps is a hole in al-Khalil Mosque
that waits hungrily for my thirsty lips.

Where is the homeland? 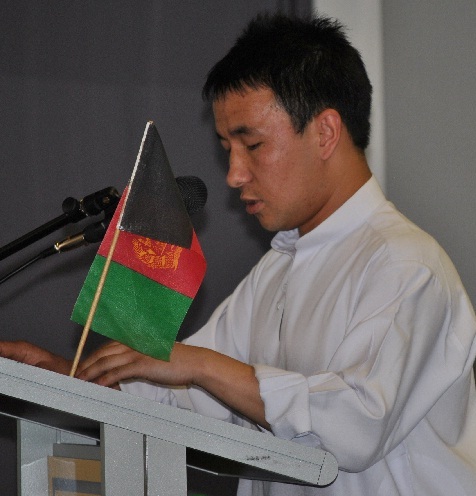 Fazel Safari and Razia Ali, Psychology students, were then introduced to the audience. They proceeded to discuss the subjects of the media, movies and cinemas.
Fazel revealed that Afghanistan has a long musical history and as he talked about this he pointed out the three types of music – religious, classical and pop. He talked about Ahmad Zahir and Saraban from the 1960s and then focused on Farhad Darya the recent singer in Afghanistan who had won many awards for his fine musical talent. He then named and described the traditional musical instruments of Afghanistan such as Dohol, Dayra, Rubab, Chichak and Damboora.

Next, Razia Ali informed us about the films and cinemas in Afghanistan. She acknowledged the long history of movie making and cinemas and reminded us of many awards received for this work in this industry. In the 1960s and later Afghanistan was recognised as a good place for making movies such as ‘Khuda Gawah’, ‘Feroz Khan’s Dharmatma’, ‘Escape from Taliban’, ‘Kabul Express’ (Bollywood Movies) as well as ‘The Kite Runner’, a Hollywood movie.

Farid Dorukhshan The singer of the event then presented some live music. 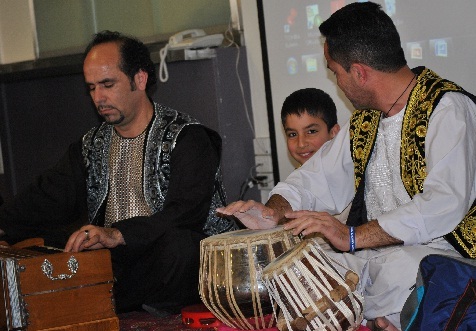 Hashem Bahmanzada, a nursing student, spoke about some of the traditions of Afghanistan such as Nowroz, Haft Mewa, Samanak, Mela-e Gul-e Surkh, Jashni Dehqan and weddings.

Hamed Muradi was the final speaker whose subject was the clothing and food of Afghanistan. He illustrated his speech by drawing attention to the clothing worn by Sonia Ziaye saying ‘The traditional women’s clothing is really unique and beautiful.’ He also talked about and named some of the most delicious and famous foods of Afghanistan.

Farid Durokhshan was again invited to the stage to sing and the entire group of girls and boys danced the traditional dance.

At the end of the program the Union Group extended special thanks to Elyas Alavi and Farid for their participation as guests and also to Baqir Bahmanzada, Fazel Safari and Hashem Bahmanzada for the great photos.
The entire group of “Flinders Afghan Union” also collected some donations and these donations will go to poor Afghan people back in the country.