On 21st of September 2011, at 5:33 PM Julia Weikfield a radio-broadcaster began to talk about the purpose of the “Words @ the Wall” event at Treasures wall state library of South Australia.
Julia introduced Molly Murn an Australian Poet and Elyas Alavi an Afghanistani Poet and a painter. She also talked about the “Dorredari foundation”, a group of Afghanistani poets, writers and artists. 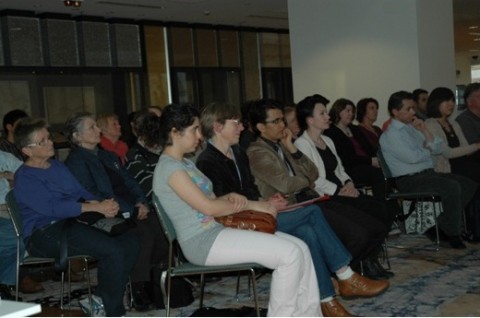 Molly Murn an English literature professor from Flinders University was the first poet and covered the history about Rumi (a Persian poet) and some affect of his poems that have influenced world’s literature. She then read two of her poems in the gathering while stated the year 2007 being a lucky year for her, as she became a mother and in the same year she made her path through poetry. Molly was rewarded by great round of applause by the audience for her significant poems.
Next Elyas Alavi read two of his poems in Persian then in English.
Following Elyas, Aziza Zafari started to read a poem.
Here is the Season of “Harshness”

No one is really worried
When you go
And no one is really excited
When you come
Here is the land of “frustration”
All the songs are due to depression
And no dreams are born
(A part of Aziza’s poem)
Eqbal Hussain Safari a student of the international law was then introduced to the audience. Iqbal repeated a part of Aziza’s poem “Here is the land of Depression”. 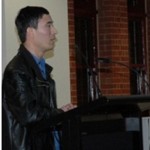 Then continued by sharing some of his sorrows and mentioned that when he first came to Australia, he was very depressed, as he missed his family and friends back in the country. The audience was moved by his sad story. He then went on to read his poem in Persian followed by English.

Juma Rahyab was another poet who read two of his poems in both languages Persian and English.

Followed by Juma, Mrs Roshanak Ismailzada an Iranian Poet, whose book has been published under the name “One Million Flight”, spoke about her beloved homeland. 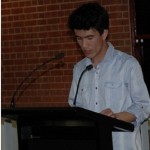 She then continued by mentioning the Iranian women who have been the victims of oppressive and corrupt regimes and who are forced to wear Hejab in the last decades. Roshanak pointed to Australian female Audience at the event and pursuit that sometimes ago before the Mullah’s enter Iran, the women used to wear the same dresses that today Australian women wear.
Due to her love and respect towards her sisters, she had written poems that were read to the audience.
Julia Wiekfield once again came on stage to announce ending of the event and present paintings and book of the artist and poet, Elyas Alavi.