Stefan Berg from Committee for a Workers’ International among Hazara protestors 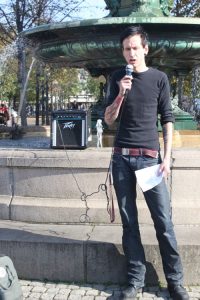 We are here today to mark the massacre of the 30 Hazaras killed by border police in the Pakistani city of Quetta, near the border to Afghanistan. Hazaras are a persecuted minority which is not left alone by the authorities in either Pakistan, Afghanistan or Iran where they are living. The past month has more than 100 Hazaras been killed in targeted killings.
But these killings and other abuses has not gone unnoticed. Large demonstrations and strikes, where shops have closed in protest against the violence, have taken place in several locations, not only in Quetta.

On 20 September 26 people were killed in Mastung south of Quetta. 22 of them were Hazaras and the hazarian community immediately took to the streets in protest.
The demonstrations were directed against the regional government with a requirement that you have to offer security to all citizens regardless of ethnicity. Hundreds of women marched in a hazarian neighborhood chanting anti-government slogans: What is our crime, what are we punished?

The oppression of minorities is taking place worldwide, and the situation facing millions of Hazaras are forced to live in is not unique but are shared by people all over the world who are oppressed because of their ethnical background, sexual orientation, their religion or their political views.

To fight this oppression, you have to unite, you have to see what the real enemy is and what it is that stands for oppression. Hazaras live, just as Kurds in Iran, Iraq and Turkey, just as the Palestinians on land occupied by Israel and just as Tamils in Sri Lanka, without the ability to control their own lives as the majority population.

But it is important to remember that it is not the neighbor, colleague or man or woman in the store where you shop that is the enemy – it is the politicians and governments who are behind the oppression, which is behind the violence directed against minorities around the world.

The solution to the problem, and a step toward freedom is to organize across these borders that
we learn is more important than ever – to unite across ethnic lines, across religious beliefs and look to our common interests. There are workers and poor around the world who pay the price for the capitalists and politicians to live well, and many times we’ll pay with our blood.

But when we go together we can accomplish miracles, just as we have seen happen in the revolutions in North Africa and the Middle East. The masses in Tunisia and Egypt have overthrown dictatorships. In Syria, Yemen and Libya people are struggling against oppression that has stifled them for decades, and when the people rises unbited those in power tremble.

That solidarity rallies are held today while demonstrating in Quetta is extremely important.The requirements must be international, and not just by the hazarian minority who suffer. We demand an end to killings in Pakistan, Afghanistan and Iran.

We would rather deport migration minister Tobias Billström to Kabul, than quietly watch while imprisoned and persecuted refugees as Ahmad Azizi are deported.

We support any initiative for a joint struggle against the politicians who dictate the policy – international solidarity with the Hazaras and the common struggle of capitalism limits!