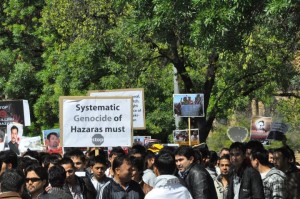 On October 4, 2011, gunmen riding on motorbikes stopped a bus carrying mostly Hazara Shia Muslims who were headed to work at a vegetable market on the outskirts of Quetta, the provincial capital. The attackers forced the passengers off the bus, made them stand in a row, and opened fire, killing 13 and wounding six others. On September 19, near the town of Mastung, gunmen forced about 40 Hazara who had been traveling by bus to Iran to visit Shia holy sites to disembark, shot 26 dead, and wounded six. Although some Hazara managed to escape, another three were killed as they tried to bring victims to a hospital in Quetta. Lashkar-e-Jhangvi, a Sunni militant group, claimed responsibility for the September 19 attack.

“The targeted killings of Shia are a barbaric attempt at sectarian and ethnic cleansing,” said Brad Adams, Asia director at Human Rights Watch. “The government’s failure to break up the extremist groups that carry out these attacks calls into question its commitment to protect all of its citizens.”

While sectarian violence between Sunni and Shia militant groups has been a persistent problem in Pakistan, more recent attacks have primarily targeted ordinary Shia going about their daily lives. Despite Pakistan’s return to constitutional rule in 2008, scores of unarmed Shia have been killed across Pakistan by Sunni extremists, particularly around the Islamic month of Moharram, which is of particular significance to the Shia. Human Rights Watch has recorded at least 16 attacks on the Shia so far in 2011 across Pakistan.

Sunni militant groups such as the supposedly banned Lashkar-e Jhangvi operate with impunity even in areas where state authority is well established, such as Punjab province and the port city of Karachi, Human Rights Watch said. Both in Balochistan, where local militants challenge government authority, and elsewhere across Pakistan, law enforcement officials have been seen to look the other way during attacks on Shia and other vulnerable groups.

In Balochistan, some Sunni extremist groups are widely viewed as allies of the Pakistani military, its intelligence agencies, and the paramilitary Frontier Corps, which are responsible for security there. Instead of perpetrating abuses in Balochistan against its political opponents, the military should be safeguarding the lives of members of vulnerable communities under attack from extremist groups, Human Rights Watch said.

Pakistan’s federal government and the provincial government in Quetta need to direct the military and Frontier Corps to actively protect those facing attack from extremist groups, Human Rights Watch said. National and provincial authorities should make all possible efforts to quickly apprehend and appropriately prosecute those responsible for the September 19 and October 4 attacks and other crimes targeting the Shia population.

“President Zardari needs to understand that the will of the government to protect ordinary people is measured by action,” Adams said. ”As far as protecting the Shia is concerned, Pakistan’s government has been all talk and no action.”