HRW urges US to pressure Pak govt on Balochistan situation 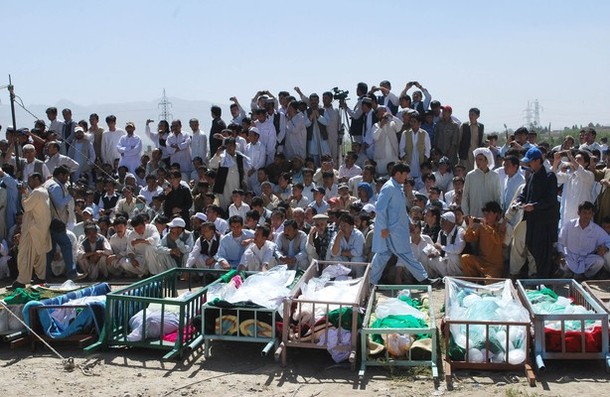 ISLAMABAD: Human Rights Watch, an NGO keeping a watch on gross human rights violations in Balochistan, has asked the United States to take action against the crimes taking place in the province.

In a detailed report complied by HRW Pakistan Director Ali Dayan Hasan, it has been recommended that the US government press Pakistan to take all necessary measures to end the violations and fully investigate and prosecute all those responsible for the crimes.

The report states that many government agencies such as the ISI, IB, Frontier Corps, police and other such groups are responsible for many of the violations and demands the government take action and warn the culpable agencies.

The report further suggests that US should urge the government to suspend police and military assistance and cooperation programmes with the Frontier Corps, police, and Pakistan Army units based in Balochistan until military and civilian authorities fully investigate and take appropriate action against those committing the crimes.

The report wants Pakistan to implement effective mechanisms in place to ensure that no security unit funded or trained by the US is responsible for human rights violations and that adequate vetting and oversight mechanisms are in place to help deter abuses in the future.

The HRW further recommends that the US urge the Pakistan government to investigate alleged human rights abuses committed by the Lashkar-e-Jhangvi and other banned groups and hold those responsible to account, particularly those who have committed serious crimes in Balochistan such as the killings of several Shias.

It also demands that the Pakistan government take urgent measures to protect members of the Shia community and other vulnerable groups in Balochistan and across Pakistan and that the US government should also urge Baloch nationalist groups to cease attacks and threats against all civilians, particularly non-Baloch residents of the province.

Widespread fear of harassment, discrimination and killings has prompted some Shia community members living in Balochistan to consider leaving the country, even by illegal means.

Human rights groups say over 600 Hazaras have been killed since 2000. Media reports speak of dozens recently killed in attacks on the community in Quetta and in other parts of the province.

HRW states that their research indicates that at least 275 Shias have been killed in sectarian attacks in Balochistan alone since 2008.

The group has also urged the government to act against those illegally ferrying people out of the country in exchange for large sums of money.

The report further states that the government should take appropriate disciplinary action against group members who order or participate in attacks on civilians.

The HRW, in the report, discusses the political, economic, geographical and demographical aspects of the province in details. It reveales that the province has historically had a tense relationship with the federal government, due to issues of provincial autonomy, control of mineral resources and exploration, and a strong sense of deprivation and exploitation.