Hazara People: Afghanistan suffers not only insecurity, but corruption as well. Corruption has broken the back bone of Afghanistan and so far billions of Dollars of foreign aids are being stolen by the national Non Governmental Organizations since 2002. Today none of these NGOs take any responsibility for the accountabilities.

The Karzai Government has many times complained about the financial corruption and stolen funds by the NGOs but in practice nothing is done to stop the corruption. 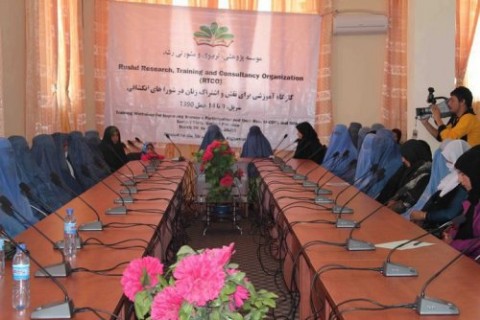 Fox News through a series of researches has had some finding-outs that are published on its website: The following article is about an Afghan NGO that namely works for the Afghan Women rights.

This Association is raising funds for Afghan Women in different countries for many years but their activities are suspicious and there has not been transparency and accountability for the funds they collect. They have always rejected to receive the journalists who question them for accountability and transparency.

Legislation approved by Congress will funnel billions of U.S. tax dollars into reconstructing Afghanistan. FMF had campaigned vigorously for the measure and undoubtedly expects to guide the money slated for Afghan women.

Before this occurs, FMF should be called to account for its role in funds directed toward the Revolutionary Association of the Women of Afghanistan. In a blitz of post-Sept. 11 media, RAWA became the sine qua non of Afghan women’s oppression, largely due to PC feminists, especially FMF, who acted as public relations and fund-raising agents. The money poured in.

Skeptics who mentioned fiscal accountability were ignored. We are even less likely to be acknowledged now that RAWA is embarrassing FMF.

In April, a widely circulated letter from a prominent RAWA member was posted on RAWA’s ListServ. The letter blasted the FMF-owned Ms. magazine as “the mere mouthpiece of hegemonic, U.S.-centric, ego driven, corporate feminism.” Ms. magazine’s sin? In “A Coalition of Hope,” an 11-page feature on Afghan women in the magazine’s spring 2002 issue, RAWA was not mentioned.

FMF has reacted with silence. A search on the current FMF site under “Revolutionary Association of the Women of Afghanistan” or RAWA finds no matches.

Where else can a skeptic ask questions that might damage FMF’s credibility as a money manager for Afghan women?

RAWA provides an e-mail address for queries and a P.O. Box in Pakistan to which funds should be directed. Funds can also go through the Afghan Women’s Mission, a California non-profit organization. When the money is inserted into a FedEx envelope to Pakistan, however, accountability seems to vanish.

For example, through RAWA’s Teacher Sponsorship Program, a donor can sponsor a teacher for $55 or $105 per month. But, unlike organizations such as Christian Children’s Fund that encourage letter writing, AWM advises, “We are hoping to establish a program of letter writing … but that remains to be seen … there is no mail service whatsoever in Afghanistan.”

Even now? And what of the refugee camps within Pakistan, where RAWA is said to operate schools? (As the CCF sponsor of an Ethiopian child, I communicated with her even during times of war.)

It seems odd: RAWA can process foreign funds using Federal Express and a non-profit organization; it maintains donation buttons on an elaborate Web page and mirror site; it disburses funds through a teaching network in a war zone. Yet, it is not sophisticated enough to forward a donor’s letter verifying the disbursement. Why?

RAWA does not invite questions. If you are a member of “the media,” you are asked to contact rawa@rawa.org, with the warning: “It may be difficult to contact a member of RAWA as they are overwhelmingly busy right now. There are no RAWA members permanently stationed in the United States.”

An article in the L.A. Times described one activity that keeps RAWA busy: check-gathering in the upstairs of “a coffeehouse in Old Town Pasadena” — the “de facto office” of the AWM. The article mentions: $500 from a doctor and his wife in Wisconsin; $697 raised by a woman who walked from New Hampshire to New York; $102 from a bake sale held by a school’s “femme club” and “diversity club”; $500 from a prominent actress; $9 for RAWA pamphlets; $5 in royalties for republishing a photograph; three checks that total $1,950.

How were these — or the “anonymous” check for $100,000 mentioned on the AWM’s site — ultimately spent? RAWA seems too busy to explain.

Unlike relief agencies such as the Red Cross, RAWA has time to take political stands. RAWA declares itself to be “a political/social organization of Afghan women struggling for peace, freedom, democracy and women’s rights …”

Apparently the struggle involves slandering prominent Afghan women who disagree. Consider Sima Samar, whose non-profit group, Shuhada, runs hospitals and schools for girls in Afghanistan. Through RAWA interviews and an e-mail campaign conducted by a RAWA supporter, serious charges were leveled against Samar; an investigation subsequently dismissed the charges.

For such personal attacks, RAWA has been called the “Talibabes.” And, according to Sayed Sahibzada, an Afghan U.N. Development Programme officer who works with women’s groups, “I have not heard one group that goes along with RAWA …”

RAWA also condemns U.S. policy in Afghanistan. Consider RAWA’s March 8 Statement on International Women’s Day. “RAWA has consistently emphasized the fact that the Taliban, Usama & Co., and other fundamentalist bands in Afghanistan are creatures of myopic U.S. policies … We look upon the U.S. military campaign in Afghanistan … as a fracas between patron and ex-protégés …”

Given such statements, the open letter may be correct in accusing FMN of backing away from RAWA due to FMN’s political ambitions.

But some feminists remain unconcerned. In a Salon.com interview, Eve Ensler, author of The Vagina Monologues, dismissed RAWA’s alleged connection to Maoist groups. “I may not be the most thorough investigator,” she admitted. Yet Ensler declared later in the same piece, “I’ve become RAWA’s greatest defender.”

Whether maintaining silence or issuing blanket approvals, PC feminists are not likely to call for an accounting from RAWA. It might lead to an accounting of themselves in this same matter.

Wendy McElroy is the editor of ifeminists.com and a research fellow for The Independent Institute in Oakland, Calif. She is the author and editor of many books and articles, including the new book, Liberty for Women: Freedom and Feminism in the 21st Century (Ivan R. Dee/Independent Institute, 2002). She lives with her husband in Canada.