The first few pages of Katib’s opus Siraj al Tawarikh, or Lamp of History, published around 1902/3 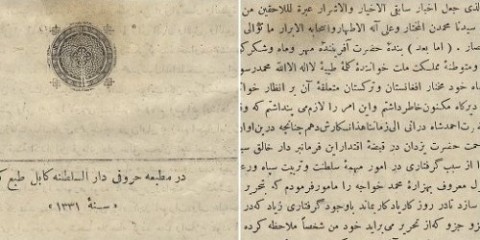 With the beginning of Amir Abdul Raman Khan’s rule in Afghanistan in 1880 the social and political persecution of Hazaras began. Brutal attacks began on Hazarajat , immediately transforming a calm and peaceful region into a massacre site and grab for land. The Hazaras were eliminated especially in south and eastern part of the country and the royal decrees allowing mass murder, looting and the suppression of Hazara political and economic rights continued until his death. By the end of his rule in 1901 one hundred and twenty thousand families had been wiped off the map.

His successor, Habib Ullah Khan, was more magnanimous in that his crimes were allowed to be documented. He employed a court writer who became the first witness to recording the ethnic upheavals that left the original inhabitants of Afghanistan as landless peasants forever on the run.

Some children and decedents of of Daru ancestors came to Kabul and request the Emirate to gave them the fields, farms and plantation in the village of Chora which belongs to Hazara people and the great Amir accepted the request and assigned Dost Mohammad Khan Ayshak Aqasi of Prince Sardar Habiballuh Khan who is from the same tribe as the head of these people to implement the decree. In illuminated script here is the decree: The plantations and farms of Hazara people who were living in the Chora district should be measured and for every male three acres and for every female half of it has to be given…

they should have a comfortable life and also the government has to provide seeds, cows and machinery which are needed in agriculture for one year. For every male and female and for every child and elder every month 303 quarters of wheat and different kinds of grains, of a weight used in Kabul, distributed from the government warehouse.

Dost Mohammad Khan and the Daru descendents should occupy the area and make Hazaras work under them , make the Hazaras leave their residence, confiscate their lands and force them to leave despite the fact that they have paid taxes on those plantations and farm fields and give their lands to Pashtuns…. And from that day Dost Mohammad Khan used all his force to evict the Hazaras and bring in different tribes of Pashtuns.

Up until 1902 almost 400,000 Hazaras were forced out of their homeland and their houses, from Qurb of Kandahar to Mulistan, Hazaras of Behsod and Saypaaye Daizange, Nelie, Daikundi .The length and width 150,000 of the Daikhutahi Daichopan, Daymere and Dayfolad has been given to Pashtuns. 100-120 Hazara families have fled and made it safely from Afghanistan to foreign countries like Khurasan of Iran , Turkistan of Russia and Bokhara, Punjab in India and Baluchistan.”” 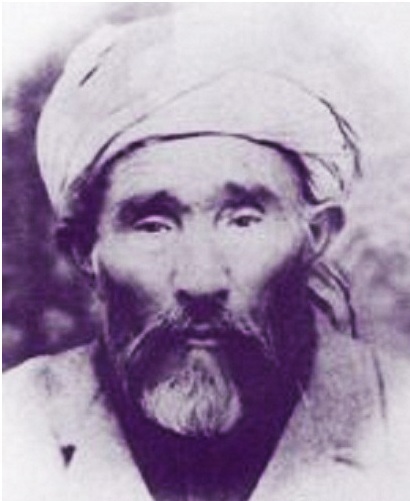 Faiz Mohammad Katib, 1862-1931, an ethnic Hazara born in Qarabagh, Ghazni, who went on to be Afghanistan’s greatest social historian and chronicler of Amir Habib Ullah Khan’s brutal rule. He was a member of what became known as Junbish-i Mashrutiyat or The Constitutionalist Movement.

And so it goes on to describe the great injustices committed during Amir Habib Ullah Khan’s reign of Afghanistan in Faiz Mohammad Katib’s three volume history of Afghanistan, Siraj al Tawarikh.

Hazara lands, he writes, were taken from them and given to the nomadic Kuchi Pashtun tribes and others and the people were prevented from leaving the country and emigrating.

In Faiz Mohammad Katib’s text he notes; “A few families, of whom their affluence was given to Pashtuns, were going to British India for assistance, but en route were Royal guards Qhandow Khan and Marza Sahab Khan, who had the order that if any Hazara passed through the border the guards of that border would be hanged and the Hazara familieswere put in Kandahar jail until they died.”

Imprisoning Hazaras inside Afghanistan and preventing contact with the outside world was a strategy used to disempower the Hazara people then, as it is now. The tyranny of the Karzai government and the Pashtun warlords who continue to suppress them is consistent with events of a century and more ago.

In the second volume of his work Faiz Mohammad Kateb writes about two individual Hazaras, “Hassan and Khudadad who were living in Kandahar became sick and went to seek the British government’s medical care and became well. When the ruler of Kandahar found out on the 21st day of Ramadan he ordered that they should be taken to Herat and be given to the ruler of Herat to imprison them until their death.’’

The attitude that Hazaras are second class citizens in their own country survives today and the present government is also following the same policies of the past against Hazaras but in a different shape and form and in a somwhat more complex way. In 2012 the residents of areas close to Oruzgan, Ghazni and Maidan Wardak provinces are not safe for Hazaras.

People of Daikondi province, after nearly 200 years of systematic and continual murder of their people, are forced to leave their houses. After Daikondi became a new province, was briefly calm until separation from the Gizab district in 2006. The geographic structure was damaged. Mirroring the situation in 1890, as Katib writes, “Uruzgan and the suppressed people of Gizab facing Abdul Rahmani threats.”


View Larger Map
The geographical location of Gizab and the residents of Shahrastan , Gajran and other districts makes Daikondi province suffer perpetual insecurity due to the proximity of Oruzgan province. The residents of Daikondi are seeing terrorists, land occupiers, the narcotics mafia and weapons moving through the Gizab district into Daikondi province .The Afghan security forces are new, mostly uneducated and hungry.The security forces can’t defend violence against the people of Daikondi; they couldn’t before nor are able to now, despite Western involvement.

In May 2011 two teachers, Sakina Wafai and Ahmad Wafai of Ghaswan High school in Alqah district of Daikondi province were killed. Although their stories were told many times, no action has officially been taken to prosecute those who committed this act of violence and no one has been charged. According to one resident, one member of the Afghan police was also involved. Taliban make regular public announcements that threaten that boys and girls aren’t allowed to go to school and they have told about the consequences of it : murder.

Through the radio of Daikondi, the Taliban media unit announced they had beheaded seven people and threw their bodies in river. Also two years ago thirty nine students had been poisoned in a school in Daikondi. In Kjran district eight police and many residents were killed in horrific circumstances by the Taliban and the people that defended them have been forced to flee.

A Hazara child in Daikondi

Written or oral threats to families by the Taliban forces hundreds to abandon their homes. Taliban and their supporters in Tamzan, 20km from Nelie in the centre of Daikondi province had the control of large swathes of the region. There is always news on Daikondi radio that many passengers on the way from Kabul to Kandahar and Herat have been killed indiscriminately. The news from Ariana TV recently reported that twenty travellers on their way to Herat have been killed by Taliban; they beheaded them and their bodies were thrown on the side of the road.

The main factor to note in this story is the Karzai government’s decision to give away Gizab province to Taliban leaders to control. Life is very difficult in Daikondi province.Apart from threat to kill scenarios, lack of communication facilities, roads, lack of electricity, lack of access to medical services, poverty, bad weather and heavy snowing in the winter as well as the existence of corruption in the local administration and the judicial system means it is a lawless zone. Lack of schools mean illiteracy reigns supreme.

Despite the fact that the government is not addressing high level of poverty in areas where Hazaras live, it is expanding and strengthening Taliban’s jurisdiction in those neighbourhoods such is Tamzan and Gizab, Daikondy, Kabul-Ghazni, Maidan-Behsod, Bamian-Parwan and others. The ever present Kuchi tribes are there also as the handmaidens of misery, the pawns in Karzai’s fabric of centralised control.

There is no mystery as to why Hazaras continue to flee Afghanistan to Australia, Iran, Norway, Italy, England. Neither is it a secret as to why Hamid Karzai has signed deportation agreements with these countries. Although in Australia’s case no Hazara is currently facing deportation back to Kabul.

For Dari readers; The entire original text by Faiz Mohammad Katib is viewable