The World waiting for rebuilding of Buddhas of Bamyan 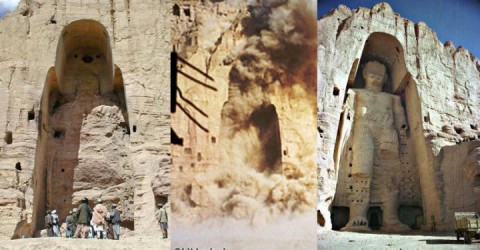 Toppling of Taliban Government has now reached to more one decade, but it needs decades to recover ethnic and sectarian wounds inflicted by Taliban towards innocent people of Afghanistan in general and destruction of two giant standing statues of Buddha in particular, which were historical and cultural heritage of the country in Bamyan, Hazarajat.

Here is a brief note about Buddha, which includes of a French Archaeological Mission’s reports that the smaller statue, 37 meter high, (Shakyamuni) locally known as “Shamama”, constructed in the 2nd and 3rd century A.D while the biggest statue, 53 meter high, Vairochana) (locally known as “Salsal” had been chopped during 3rd and 4th century A.D in the heart of the cliff. In accordance with French Mission Report that “we must keep in mind that historical heritage of Bamyan’s standing Buddha had not been built in months, years or a century but centuries of constant efforts of thousands scriptures and other skilled-men helped chopping the two giant standing statues”. (Page: 19-20).

Here in this write-up, it is not possible to discuss thoroughly about Bamyan’s bloom period, which consists of centuries for being holy place of Buddhists and being situated on the mainstream of Old Silk Highway and in the hub of three great civilizations i.e. Central Asia, Mesopotamia and India. According to well placed sources, a considerable part of Afghanistan had been part of newly established Islamic Government during reign of Hazrat Umar (second caliph) didn’t take interest in damage of two standing statues of Buddha but more focused in preaching of Islam. (Yazdani, Page. 25)

During subjugation of Bamyan valley, Sahabas (companions of Holy Prophet Muhammad) and tabaeen (companions of Sahabas) could have participate along with other Muslim conquerors whose prestigious position is acknowledged by all sects of Islam, didn’t feel the need to ruin the statues of Buddha’s. However, in modern era, Iranian king Nadir Shah Afshar, (Assassinated 1747) and Amir Kabul Dost Muhammad Khan (1843-1864) carried out several attacks to ground Buddha’s statues with canons.(Ghubar. Page. 212)

Here it is also necessary to mention that Amir Abdul Rehman, King of Afghanistan (1880-1901) also played vital role in destruction of Buddha.(Footnote. Asar-e-Atiqua-Page. 58.Bamiyan for being frontline had to face frequent threats during 23 years (1978 to 1990) long civil war and confronting with Soviet support Kabul forces, it also faced serious danger when in 1990 Hazara Hazb-e-Wahdat took over Bamyan after severe fighting with opponent group and later on, fighting with Taliban ground forces and aerial attacks.Hazara Hazb-e-Wahdat during its period, (1990 to 1994) knowing significant of Buddha’s statues didn’t permit any individual to harm them and took strict measures to inhibit illegal diggings and shifted ancient Bazaar to East of Bamyan some kilometers away from Buddha statues in order to protect them from further obliteration.

In addition, Hizb-e-Wahdat also extended cooperation with concerned NGOs for protection of these historical monuments of the world.(SPACH News letter issue-4-1998 Peshawar Pakistan also Herald Karachi Dec. 1997). Within such wretched circumstances, in Sheikh Ali frontline, Taliban commander Mullah Abdul Wahid rocked the civilized world and lovers of human heritage culture through his statement that “Taliban forces would destroy Buddha’s statues after subjugation of Bamyan valley” but after stiff resistance from the civilized world, Mullah Umar, Supreme leader of Taliban had to issue his statement that “it is obligation of Islamic government to ensure protection of Buddha’s statues”(Buddha Dies-P. 16) but in last days of February 2001, the same Amirul Momaneen (leader of the faithful ?) changed his mind and held Buddha responsible for long spell of drought and declared them against the teachings of Islam and issued declaration for destruction of Buddha’ statues. All Islamic countries including religious scholars and even Maulan Sami-ul-Haq, strong supporter of Taliban in Pakistan didn’t favor the motion of Mullah Umar and declared it against the traditions of Islam. (Buddha Dies-P. 16) While, Mullah Umar ignoring world demands remained stick to his declaration and blown off the two Historical standing statues of Buddha by 50,000 kilograms dynamite on March 12, 2001.(Budshikan calendar 2001, Karachi)

It has been cited earlier that there was no cause of hatred toward statues of Buddha by Taliban in accordance with Islamic rules and regulations (shariyat) because no religious scholar or organization of Islamic world supported the move of Taliban, however, reliable resources declared this harsh step of Taliban as retaliation against Hazara nation (Buddha Dies P.17 )

A covert order from Qandahar also shows in which Taliban forces have been encouraged to damage cultural heritage relating to Hazara nation and Mughals. (The writer possesses a copy of order, written in Pashto language posted on Hazara.net).

Meanwhile, for the sack of Buddha’s protection, Hazara Hizb-e-Wahdat had ensured Kofi Anan, Secretary General United Nations through a letter on March 7, 2001 that Hizb-e-Wahdat would avoid attacking Bamyan in order to protect statues of Buddha from further damage and the party is ready to declare Bamyan “no war zone area”. It may be recalled that few weeks back of the letter,Hizb-e-Wahdat once again, controlled over Bamyan for the period of nearly one month during mid January and February 2001 and the world media declared tremendous political and administrative set back for Taliban who were claiming of 95% occupation of Afghanistan (Daily Mashriq Quetta, Feb 16, 2001) but Taliban forces once again succeeded to subjugate the area on February 18 and in retaliation it carried out Men slaughter and massacre of Hazara nation while most of them were reported skinned(UN report Dec 21,2001)and finally demolition of Buddha carried out for being the most significant historic heritage of Hazara in Afghanistan.

Anyhow, after falling of rigid Taliban regime, Afghan interim-government, in its first formal session announced re-construction of two grand standing statues of Buddha which pleased millions human cultural fans all over the world including Afghanistan.

Hamid Karzai, Afghan interim-govt President reiterated his pledge during formal visit of Bamyan on April 2002. One month later of Karzai visit to Bamyan, an international seminar held on May 29, 2002 with respect to reconstruction of Buddha where Ikuo Hirayama UNESCO’s goodwill ambassador for culture, said that he believed the damaged Buddha’s should not be renovated so visitors can remember acts committed in the name of a brand of Islam that few outside the Taliban endorse. Saying the money for the Buddha’s’ reconstruction could be diverted to Afghan refugee relief; Hirayama compared Bamyan to sites like Auschwitz and Hiroshima, where visitors are shown to contemplate the acts that have taken place. “The remains in Bamyan today are testimony to the tragic and deliberate destruction,” said Hirayama,who was 15 when he survived the Hiroshima atomic bomb dropped by the United States and saw classmates and teachers die. “Instead of collecting and reassembling the fragments, we should maintain the current situation,” he said. “The creation of these Buddhas are an important historical moment.

But so is the Destruction. Both are part of history now. I think that is the lesson to be learned”, (AP). Concluding his remarks, it is very pity to say that ambassador of UNISCO through his statements has consciously tried to make a great escape from his obligation which is matter of great concern and such sentences do not suit to an international organization like UNISCO.

If we thoroughly review into the statement of ambassador, we would easily come to know that reconstruction of devastated Western cities in result of Second World War was a great mistake and Japanese deserve to be discouraged for renovation of Yoroshima and Nagasaki in result of atomic bombs. Keeping in view ambassador’s statement, existence of UNISCO itself becomes a sign of interrogation which claims working for protection and restoration of world’s cultural heritage. It may be mentioned that UNISCO has succeeded to collect $ 1.5 billion for provision of protection to only 24 cultural heritage of the world within few years. UNESCO has spent 80 million dollar for the restoration of only one Abu Simbel Temple in Egypt in 1959.(Buddha Dies P.6-9)

As regard rehabilitation of Afghan Refugees from the allocated amount of Buddha, it seems very difficult to digest the theory of ambassador as we know that there are hundreds of thousands of people all around the world who do not have interest in rehabilitation of Afghan refugees but have great interest in rebuilding of Buddha and ready to spend every penny of himself/herself for reconstruction of Buddha. It needs to be discussed that there are two separate subjects and do not have any co-relation to each other. It must be mentioned here that with in Afghanistan there is also a strong lobby who do not interested in re-building of Bamyan Buddhas because it belong to Hazara minority other wise hundreds of thousands arguments can be presented in support for reconstruction of Buddhas but it would be better enough that right now the majority of Afghans, 400 million followers of Buddhist spread all over the world and other millions lovers of human cultural heritage want rebuilding of Bamyan’s two giant standing statues once again particularly it has been strong desire of Hazara nation as well to watch them standing among themselves. Hazaras, despite being not in political power and without changing its believe, attached dozens of folk tales to those Buddhas.
As regard practical steps of UNESCO, it is worth mentioning to say that a construction company of Turkey has eased reconstruction work of grand Buddha’s statues for it by launching reconstruction work of a devastated bridge of fifteen century in Bosnia by fanatic Serbs. More over now German experts have conformed that at least rebuilding or in true terminology restoration of one giant Statue is possible with help of fragmented pieces. The report was presented during a recent Paris conference (2nd March 2011) on 10th anniversary of tragic destruction of Bamyan Buddhas.

Before marking full stop, I would like to conclude my sentence by the phrase that “The world is anxiously waiting for reconstruction of Buddhas of Bamyan”.