In Pakistan, the Hazaras Are Punished Over Race and Religion 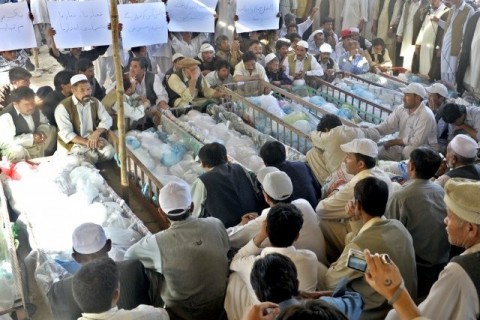 Protestors killed at least one policeman and burnt several official buildings last week in renewed demonstrations in the capital of Pakistan’s southwestern Balochistan province following the killing of five members, including a woman, from the Hazara ethnic minority community. The attackers are believed to be connected to Sunni terrorist group, the Lashkar-e-Jhangvi, which has previously accepted responsibility for similar attacks that have killed hundreds of innocent Hazaras.

Balochistan is notoriously known among U.S. officials as a safe haven for the top Taliban leadership; fewer Americans know about the gas rich region because of Pakistan’s widespread violation of human rights there in response to a nationalist movement which aims to create a separate homeland for the ethnic Baloch. However, what is not reported in the U.S. media is the systematic cleansing of a tiny minority group known as the Hazaras inside Balochistan by fundamentalist Islamic groups. These underground outfits were historically created by Pakistan’s security establishment and still continue to enjoy their covert sponsorship.

A people of Mongolian descent, the Hazaras mainly reside in Afghanistan, Pakistan and Iran. In all the three countries, where religion and race are dominant factors in shaping people’s identities and perceptions, the Hazaras have faced enormous hardships, extensive discrimination and brutal displacement. In Afghanistan, they constitute the third largest ethnic group but still complain of maltreatment by the dominant Pashtuns whereas in Iran the majority Persians equally asserts racial superiority over them despite sharing the common Shia Muslim faith. In Pakistan, around 500,000 Hazaras live, mainly in Quetta, where they have offered impressive services in local police, bureaucracy, labor force, education, information technology and sports.

The Hazaras in Balochistan present an inspiring example of community awareness and development. Visitors to their localities admit that they are always impressed with the clean streets and enviable sewerage system in Hazara towns. In addition, the Hazaras perform better than other communities in terms of girls’ school attendance, computer-literacy and fluency in English language. Despite these advantages, life remains miserable for the Hazaras. 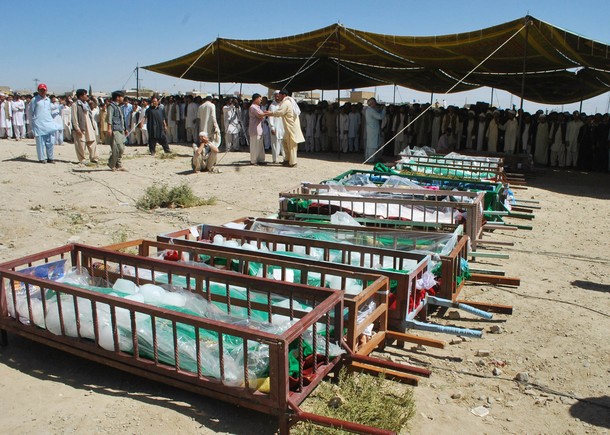 Over the past few years, incessant attacks have killed the most talented of the Hazaras, compelling the rest of them to remain confined to their ghettos in Marriabad, Alamdar Road and Taugi Road localities in Quetta. More fortunate among them have fled to Australia, a place the Hazaras term as a safe and welcoming destination.

Last week’s massacre in Quetta indicates a lack of commitment and complete negligence of responsibility on behalf of the provincial and the federal governments which had already been asked to guard this vulnerable segment of the population.

For instance, in October 2011, the Human Rights Commission of Pakistan (HRCP), a respected Lahore-based independent rights group, urged the president and prime minister of Pakistan to take “immediate, direct and personal initiative” to stop the attacks on the Hazara community in Balochistan. In a statement, HRCP’s chairperson, Zohra Yusuf, reminded the heads of Pakistani state and government that failure to protect the lives and property and basic freedoms of Hazaras people would have “serious law and order implications” across the country and make Pakistan a pariah in the comity of nations.

“Whatever their faith and calling the Hazaras are as honourable citizens of Pakistan as anyone else and the protection of their lives and liberty is a duty for which you will be held accountable,” she said.

Emboldened over government’s inaction, terrorists have indiscriminately butchered Hazaras in an extremely callous manner. On September 20, 2011, at least 29 Hazaras were killed by members of the Lashkar-e-Jhangvi in two separate incidents near Quetta.

In the first attack, armed men stopped a passenger bus which was taking Hazara pilgrims to Iran. They force all the passengers to come down of the bus before they began to inhumanly kill them. Soon after, the attackers killed three more members of the Hazara community, who had come to shift the critically injured victims of the shooting to a local hospital.

On October 3, 2011, two weeks after the earlier attack, a bus carrying Hazara pilgrims to Iran was once again intercepted and 13 passengers were gunned down while another six were critically injured.

The Amnesty International, in a statement issued on October 3, said, although sectarian violence had largely contributed to the general breakdown of law and order in Pakistan, these attacks seemed to indicate a new targeting of the ethnic Hazara community.

“Routine targeted killings of the Hazara and other groups because of their ethnicity, religion or political affiliations raises serious questions about the will or ability of Pakistan security force to protect the people of Balochistan,” said the London-based human rights watchdog.

In a debate at the British parliament on March 31, 2012, Alan Johnson, a Labor MP, said during an adjournment debate that around 600 Hazaras had been killed in Quetta but not a single perpetrator had been brought to justice.

The response of the Pakistani authorities to this human rights crisis has been that of absolute indifference and utter arrogance.

When journalists asked the chief minister of Balochistan, Nawab Aslam Raisani of the ruling Pakistan People’s Party, what his government was doing to provide justice to the families of those who have lost their loved ones, he smugly replied all he could do was to send them a truckload of tissue papers so that they could wipe their tears.

The chief minister’s remarks implicitly indicate the contempt for minority rights that exists in Pakistan even at the top official level. Had the head of the provincial government uttered similar views about the majority Sunni community, he would probably face harsh criticism from the national media and the parliament but he was ignored, mainly because he had ridiculed an ethnic minority group.

The persecution of the Hazara community is unlikely to end in the near future until the Pakistani security establishment fully abandons its covert support to Sunni fundamentalist groups such as the Lashkar-e-Jhangvi. There is ample evidence of contacts between the Pakistani authorities and these terrorist groups. In addition, the legislature, judiciary and the executive branches of the government have still not included the plight of the Hazaras in national policy debates.

Currently, the Pakistani government does not have a clear policy on how to protect basic rights of communities such as the Hazaras, who face dual discrimination because of their race and also religious belief. The authorities must take in tangible initiatives to make sure that the Hazaras are not forced to ghettoize in their communities due to fear of attacks from fanatic groups. They have offered remarkable services in various spheres of life. Therefore, the Hazaras deserve dignified treatment and reward in return of their adherence to the law and fundamental responsibilities of citizenship.