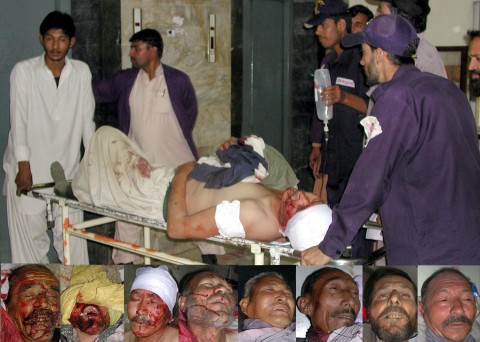 Terrorist gunmen on motorcycles killed six more Hazaras injuring three others on Prince Road Quetta on Monday April 9th. It is not yet more than a couple of weeks from the latest target killings of the Hazaras in late March in which seven people were shot dead in two different attacks and then two more were shot dead by the police when they protested against these serial target killings.

The condition of Hazaras in Quetta is critical and the corrupt Pakistani Government has taken no steps yet to control the situation and stop Hazaras’ mass-massacre.

As a peaceful and progressive society, the Hazara community in Quetta does not have any type of defending possibilities except peaceful protests around the world against their ethnic cleansing in Quetta.

The Hazara Community in Quetta is a progressive and civilized society that values education for all, women’s rights and democracy thus they are vastly being targeted by the extremist terrorist groups such as Lashkar e Jhangvi and Sepah e Sahaba.

With these series of numerous target killings of the Hazaras, Quetta has become not only a prison but a shamble for the Hazara Minority that has been historically experiencing mass-massacres.

The first mass-massacre of the Hazaras took place in the late 19th century 1880s by King Abdul Rahman Khan who was supported by the British Empire of the time, in which 62 percent of the Hazara population was massacred.

The Hazaras were massacred for the second time during the Taliban in which thousands of them were massacred in different provinces and many were forced to leave Afghanistan.

And now, the Quetta massacre is the third massacre of the Hazaras who are condemned to death for their race and religious believes.

The Hazaras in Quetta are being massacred for their race and religious believes therefore we would like to ask the interference of the United Nations Security Council to treat with this important issue the same as other parts of the world; discuss the issue and put pressures such as heavy sanctions on Pakistani Government and a resolution to condemn this massacre to stop it.