IT has been a dark spring for the minority Shia Hazara in Balochistan. On Monday, at least six people from this community were killed and three others were injured in a drive-by shooting for which the banned group Lashkar-i-Jhangvi has claimed responsibility. 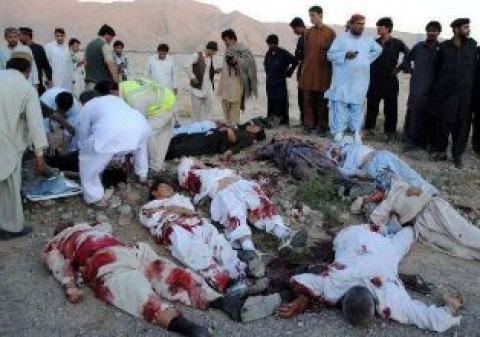 A group of people had been sitting in a shoe shop when four assailants on motorcycles opened fire on them, and then escaped. This was the third such incident in the past 10 days.

On March 29, eight people had been killed in separate incidents of firing around Quetta. In the first attack, assailants opened fire on a bus full of passengers travelling from Hazara Town towards Quetta city. They managed to flee even as people lay injured and dying on the street.

The attack on the bus was a grim repetition of another that is etched on the bloody landscape of Balochistan. In September last year, a group of men and women from Quetta’s Shia Hazara community travelling to Iran were stopped by armed assailants. The attackers told the women, children and the driver of the bus, who was not Hazara, to remain inside.

All the men and boys were taken out of the bus, lined up on the road outside and shot. When the bullets stopped flying, 29 lay dead or dying on the highway where the massacre took place. The place was Mastung, near the border with Iran, and it took the attackers half an hour to accomplish their grim mission.

Yet not a single one of the murderers has been caught. Nearly a month later, on Oct 19, a Crimes Investigation Department report submitted before the Balochistan High Court said that while an important clue had been found regarding the massacre, details could not be disclosed because that would affect further investigation.

And still the killings continue. In the months between last September and now, there have been repeated attacks on the Hazara, who can be physically distinguished from the other people of Balochistan because of their resemblance to their Central Asian and Mongol ancestors.

Again and again the Hazara Shia have been targeted, from poor daily-wage labourers living in Hazara Town to former Olympic athletes leaving their workplaces. They have been assassinated in full view of anonymous onlookers as part of the project of exterminating the Shia from the area.

Edicts issued by the Lashkar-i-Jhangvi in Balochistan, and published in local Urdu and Hazara newspapers, label members of the community as wajib-ul-qatl, or deserving of death. The community has been warned that its settlements in Hazara Town and on Alamdar Road will be transformed into graveyards as the war against them continues.

The words are grim and true; the war against the Hazara has continued in the days following the Mastung attack, with the latest set of killings representing just another episode in this macabre saga of death. Unsurprisingly, the Hazara community — that has not aligned itself with either the Baloch nationalists or the more recently settled Pakhtuns in the area — has become increasingly dejected about its future.

Just days before this latest incident of violence, a report issued by the Balochistan Home Department failed to note with any specificity the lethal conditions faced by the community.

Last week, during a hearing conducted by a three-member bench of the Pakistan Supreme Court, Chief Justice Iftikhar Chaudhry expressed his alarm over the silence, asking members of the Balochistan administration to explain why no one suspected of dumping mutilated bodies or shooting down innocent people is ever apprehended.

Undoubtedly, the Shia Hazara are victims of the ineptitude that so incensed the SC justices last week. But there are other specifics that make the Hazara community particularly hapless among the many suffering people of Balochistan.

First, their small numbers and long-standing loyalties to the Pakistani state, displayed in the military service records of community leaders, puts them at odds with the Baloch nationalist movement.

Second, the location of their enclave in Quetta, sitting close to both the southward road to Karachi and the highways leading to Iran, has in recent years become the centre of global strategic interest which has created incentives for others to drive them out.

The extermination of the community, either through targeted attacks or through the massacres, thus accomplishes not just sectarian aims, but also forces scared Hazaras fleeing the area to either abandon property or sell it at low prices to waiting land-grabbers.

The lack of local avenues of recourse for a festering human rights issue is exacerbated further by the complexities faced abroad. In previous decades, small minorities such as the Hazara, who have few local options for saving themselves in a milieu wracked by conflict, were able to avail the international human rights platform to draw attention to their plight. Even on this count, the Hazara face a particular disadvantage.

In the United States, last February’s introduction of a resolution by Congressman Dana Rohrabacher has promoted the idea that all those fighting for justice in Balochistan are automatically inimical to the Pakistani state. This misperception is particularly harmful to the Hazara cause since it inaccurately conflates a human rights issue — their right to be free of religious persecution — with a nationalist cause that seeks secession rather than accountability as a solution.

All around the world, it is always the smallest, most peace-loving, least politically connected groups that are selected as targets by those seeking to scare the populations they seek to control.

For the Shia Hazara of Balochistan, who are seeking not independence but their rights under the Pakistani constitution, the dearth of local sympathy and the brashness of global generalisations have colluded to produce a landscape where hope seems as elusive as justice.

The writer is an attorney teaching political philosophy and constitutional law.