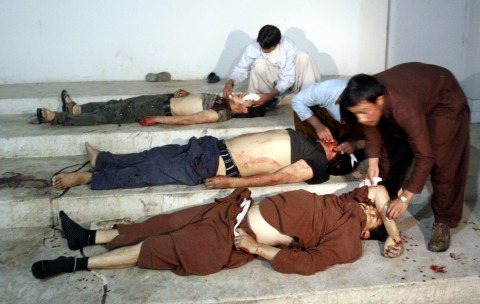 QUETTA: Three people belonging to the Hazara community were gunned down and another wounded in separate incidents of target killings in the provincial capital on Thursday. According to police, unidentified assailants opened fire on a tea store on Shahrah-e-Iqbal, killing a man on the spot and injuring the owner of the store. The assailants managed to escape from the crime scene. The body and the injured were taken to the Provincial Sandeman Hospital. The injured was later referred to the Combined Military Hospital (CMH) because of his critical wounds. The injured, the owner of the store, was identified as Sakhi Dad. A few minutes after the aforementioned incident, armed assailants attacked another shop on Archer Road, about half a kilometre from Shahrah-e-Iqbal. As a result of indiscriminate firing of the attackers, two people belonging to the Hazara community, Nor Ali and Nor Ahmed, died on the spot. The attackers fled the scene. A heavy contingent of police and security forces reached the crime scenes and the hospital to prevent any untoward incident. All shops, trade centres and restaurants on Prince Road, Liaquat Bazar, Abdul Sattar Road and Qandahari Bazar were closed after the incidents. The Hazara Democratic Party (HDP) announced to stage a sit-in outside the Governor’s House and the Chief Minister’s Secretariat today (Friday) to protest the killings. staff report
Source