Hazara International Network: Only a week after the scandalous plot against the Hazaras through the book called “The Atlas of non- Pashtoon ethnics in Afghanistan”, the Hazaras are again victims of racism and discrimination in Afghanistan.

This time, a group of the Hazara Contemporary Artists was banned, faced with physical violence by the police and the officials of ministry of information and culture. Then their art works were confiscated by the order of the Minister of Information and Culture of Afghanistan, from the exhibition called “a study of view” supported by Documenta 13 at the National Art Gallery of Afghanistan in Kabul. 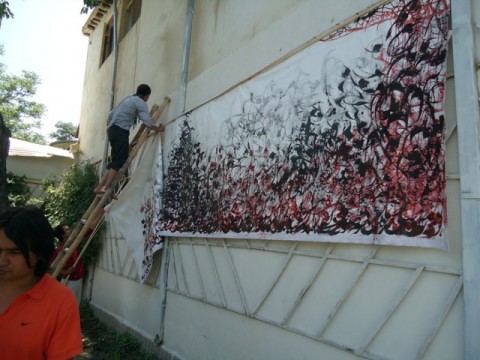 The order issued by the Ministry of Information and Culture of Afghanistan prohibits the participation of these artists and their works in any other exhibitions in Afghanistan.

In the mid day June 21st 2012 during the preparation for the exhibition, the Minister of Information and Culture and some other officials of his office came to the exhibition venue where they used violence against the artists and applied restrictions against works of three artists; Mohsen Taasha, Amin Taasha and Azizullah Hazara. They banned four art works in total and confiscated them all.

Mohsen Taasha whose works were banned in Kabul on June 21 2012, is an Hazara artist, winner of Afghanistan Contemporary Prize 2010 and a participant of Documenta 13 2012 in Kassel Germany.

In addition to Documenta, previously Mohsen Taasha’s works are being exhibited in private galleries in Prague and Paris.

The Exhibition, “a study of view” is organized by the support of the Documenta and the Goethe Institute in Kabul.

The official reaction by the Documenta and Goethe Institute in this regard will soon be published on their websites.

Many of the Afghanistani Contemporary Artists have so far condemned minister’s censorship and his illegal approach to ban and confiscate art works. 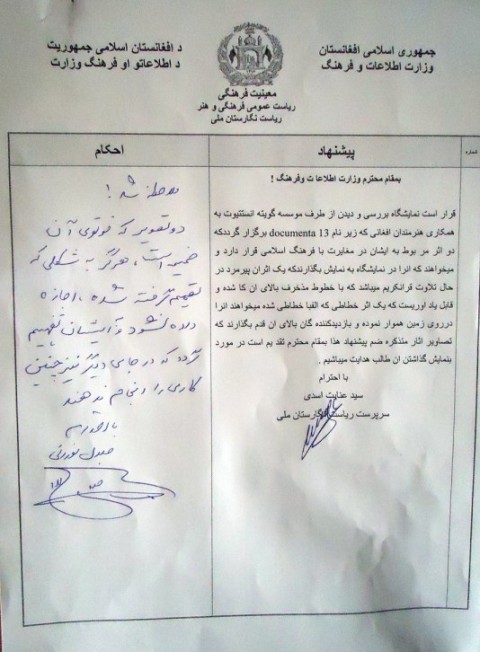