People’s need to flee means the boats will never stop

It may be a dilemma for the Australian people but, for those seeking asylum, it is life and death.

‘We didn’t have any clue where we were going. We didn’t know that we would end up in a country called Australia. Because of lack of education, we didn’t know Australia was a continent. We thought it was the next street.” 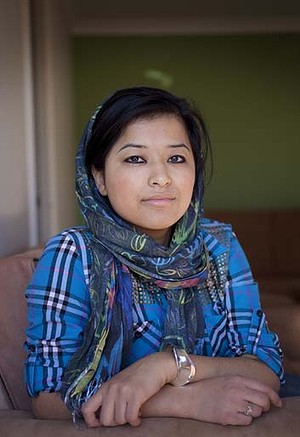 Najeeba Wazefadost, is a 24-year-old western Sydney medical science graduate. This week she has found herself explaining that a video showing a woman shot by the Taliban for ”adultery” is symbolic of the plight of Afghans born female. She was 12 when her own family fled.
As a member of the Hazara ethnic minority, in Afghanistan she was doubly damned.

”Every time my father left the house, we thought he wouldn’t come back again,” she says.
Unable to walk down the street without wearing a burqa and in the company of a male guardian, while denied the most basic rights such as schooling, almost every Afghan woman would qualify legally for a ”woman at risk” visa in Australia, she says.
As president of Hazara Women of Australia, she stays in touch with people in her homeland.

”In everyday life in Afghanistan, we have women being raped. We have women in the market committing suicide,” she says.

Fury, tears and fracture in Parliament and the press have followed the loss of some 90 people in the Indian Ocean three weeks ago in this high season for boat arrivals. In the Afghan video, which went viral, and the tragedy of the boats lies the heart of many Australians’ conundrum. We have obligations to provide sanctuary to asylum seekers, but we do not want them to perish as they reach for it and, pushed by shock jocks, politicians are inclined to play tough.

But if Australians listen to different voices, those of long-established refugees in our midst like Wazefadost, they will find an unnerving explanation of what desperation drives these people – and why detention offshore or onshore may be no deterrent at all.
Many Afghans, in particular, being villagers cut off from schooling and news, have no idea what they are going to. They just know what they are fleeing.

”None of us on that boat of 100 to 120 people, none of us knew that once we got over the ocean, we would be put in jail,” says Wazefadost, who initially thought the security guards at Curtin detention centre were ”Taliban with better guns”.

Talking to refugees can turn assumptions upside down. Australia as the humanitarian country?

Mohammed Ibrihimi has some of the saddest eyes anyone could find on a 16-year-old.
Through the prism of his past persecution, he genuinely thinks the Australian government wants to kill asylum seekers.

Recent boat deaths have brought back the loss of his eight-month-old niece Zhara, nephew Nazar, 6 and sister-in-law Zamn, 24, who died just off Christmas Island in December 2010.

Ibrihimi was on that boat with his brother Madin, 31, who still grieves for his wife and children.

They are a family of Iranians of Iraqi descent rendered stateless because neither country wants them.

”When I came to Australia, I told my family we’re going to die. And they said no, God’s going to help us. And they’re right. God helped me.’‘

Living in Berala, Ibrihimi struggles to go to school as he battles loneliness.
He constantly flicks black and gold worry beads his mother, Intesr, sent from Najaf.
”I want to tell the Government please just help us. I want my mother to come,” he says.

Refugee advocates lament that the obsessive focus on the number of boats and of people on boats obscures the reality of what is driving the people to flee.
In Auburn, the newest groups to gain asylum each have their own special places. The Somalis meet around the library, the Sudanese near Coles.

They seem to be lounging, but an approach to the Afghan men gathered outside the suburb’s old ambulance station reveals that Ali Bostani, given time since his shifts were cut as a security guard, is preparing for new English classes that night where he will help teach some of the latest arrivals.

”Some things happened to me that I don’t want to happen to other people,” says Bostani, whose HazaraVision group advises them on how to find a job, accommodation and medical services and helps with visa paperwork.

Omeima Sukkarieh, the manager of the Auburn community development network, passionately believes that the help new arrivals need goes far beyond onerous form-filling, necessary as that is.

”You’ve got this wealth of experience and skill and knowledge and all these amazing assets and strengths and what we’re focusing on is you arrived by boat and you’re a refugee and I’m going to fill out a form,” she says.

Taking that approach, with street tea salons, calligraphy classes, community gardens and wall murals, she has found an artist trained in animation, a cinematographer who does Bollywood movies and an agricultural engineer with a PhD whose skills, she argues, should not be wasted.

Jamal Daoud is a spokesman for the Social Justice Network which has referred more than 40 cases of former immigration detainees who have suffered mental illness to the lawyers Slater & Gordon for a planned ”mass action” series of compensation claims against the federal government.

He accuses the nation of having only superficial multiculturalism.
”The freedom to breathe, to cook different food, to sing different songs, but when it comes to the reality of power sharing and the access to decision-making, there is no multiculturalism,” says this Jordanian-born Palestinian.

There is an elite group of Anglo-Saxon people who just do not want to share their power and who find scapegoats in others, he says.

Jorge Aroche, executive director of NSW Service for the Treatment and Rehabilitation of Torture and Trauma Survivors, which counsels about 1000 survivors of torture and trauma annually, says his greatest frustration is the damaging detention which most boat people must endure.

”What is created is an atmosphere of helplessness, of not having control of things,” Aroche says. ”The people who jump on a boat to search for a better life are the people who are action-oriented. They take risks.

”So for those with that psychological profile, to not have control over their lives is particularly damaging.”

Australia appears to be at its best as a haven when people gain that control.

Wazefadost’s mother was pregnant when the family left Afghanistan and the family counts itself fortunate that her son was born in Indonesia before the boat journey, because she needed a caesarean.

Wazefadost is now on her second degree and wants to be a doctor, a future which, like the continent of Australia itself, she could never have imagined while in Afghanistan.