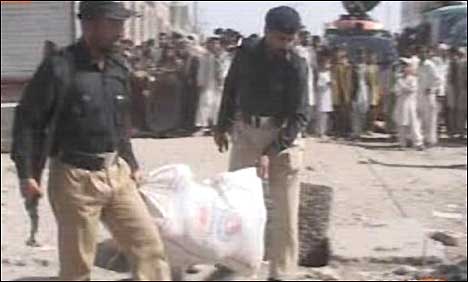 In the first incident, unknown gunmen ambushed a vehicle carrying five passengers and killed all of them near Sabzi Mandi in Hazar Ganji area.

According to police, the incident took place near Sabzi Mandi when the five passengers were on their way. Unidentified miscreants on motorcycle opened indiscriminate fire and as a result, the five passengers received critical wounds and later succumbed to their injuries.

The bodies were shifted to Civil Hospital and later the local administration and police reached the spot and started investigation.

Initial reports suggest that the incident is the result of target killing.

The other incident also took place in Hazar Ganji area in which two persons were shot dead by gunmen, rescue sources told.

On the other hand, Hazara Democratic Party strongly condemned the incident while the Hazara leader Sardar Saadat Hazara demanded to impose governor rule in the backdrop of deteriorating law and order situation in the province. He also called for a shutter down strike in Quetta on Sunday (tomorrow).