by Dr. Hussain Yasa:outlookafghanistan,Editor and Chief

11 Hazaras have so far been shot dead till the filing of this report since November 6th, 2012 amid so called high security in Quetta city, Pakistan. Three Hazaras were killed on 12th of November in Machh area nearly 80 kilometres away from Quetta city, while another six Hazaras were gunned down in the metropolis on 6th and 11th November 2012, two of the injured succumbed to their injuries later in the hospital. 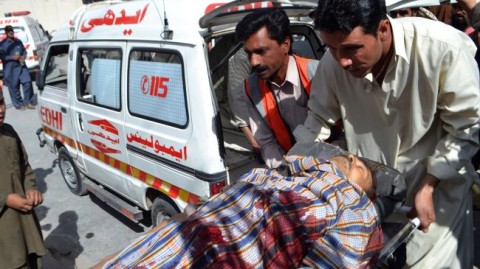 All together over 800 Hazaras have so far been killed in Quetta City, Pakistan by Leshkar-e-Jangvi, Jaish-e-Islam and other religious militant groups while international, national and social media networks along with human rights organizations and United Nations are discussing Malala, Malala and Malala.

No doubt, attack on Malala was a cowardice act of Taliban, which was condemned internationally; however Hazaras who are suffering the worst as community, the international media plus human rights organizations and United Nations seem to have turned a blind eye on the plight of Hazaras in Pakistan which seems to be double standard.

At least 100 Hazaras have so far been killed to date in 2012 in targeted attacks, including suicide, remote controlled and timer device bombings and firing and fifty attacks have been carried out on Hazaras in Quetta city, Pakistan.

Not a single terrorist has been captured or brought to justice. Supreme Court of Pakistan in its judgment about the Balochistan law and order case on 12th of October 2012 verifies that the criminals are free to move anywhere in all parts of the province without any hindrance and while riding the motorcycles, they use to kill the people but up till now not a single accused actually involved in the commission of such target killings has been arrested.

The death squads seems to have been provided full impunity in Quetta to kill Hazaras anywhere they like which has left some 500,000 Hazaras fearful of venturing out of their enclaves. “We are under siege; we can’t move anywhere,” said Khaliq Hazara, chairman of the Hazara Democratic Party and further says “Hazaras are being killed and there is nobody to take any action”.

The situation in Quetta City is getting worst day by day, while addressing to the senators Mir Hasil Khan Bizenjo informed the house that an SMS (short message service/text message) is in circulation in Quetta about sharing information in case any Hazara was spotted in the provincial capital and the result was no Hazara student is going to the Balochistan Universities and Hazara community is confined to a particular area.

Human Rights Commission of Pakistan fact-finding Report about Balochistan 2012 – Released August 30th, 2012 reports that Hazaras have been uprooted from Loralai, Machh and Zhob (small towns in Balochistan province around Quetta city) and over 800 had been killed since 1999 and at least 550 Hazaras have been killed from February 2008 until May 2012.For the last five years, more than 50,000 Hazaras especially youngsters have left Quetta city, majority of them have managed to take refuge in other countries and nearly 300 lost their lives off shores of Australia when the boats capsized.

The anti-Shia religious militant extremists mainly Lashkar-e-Jangvi publicly claims the killings of Hazaras and distributes leaflets in Quetta that Shias are infidels and they are liable to be killed according to Islamic teachings. These campaigns against the Shia community is very well known to Police, Frontier Constabulary, the Army and its intelligence services but no action has been taken against the Lashkar-e-Jangvi. After every killing incident, the terrorists walk away easily and the government seems unwilling to capture the terrorists as Hazaras are not a political or financial strength in Pakistan.

The two high profile terrorists UsmanSaifullah Kurd and Shafeeq Rind who were involved in the killing of Hazaras, mysteriously escaped from a very well-organized jail of Anti-Terrorist Force in Quetta Cantonment area where no one can go without a pass, implying that their escape was facilitated by the security agencies. The present Governor of Balochistan, NawabZulfiqar Ali Magsi and Home Minister for Balochistan Mir ZafarullahZehri have already expressed their concern for being helpless in preventing the target killings going in Quetta city.

Last year, in September and October 48 Hazaras were taken off the bus and wagon in two different incidents, were lined up and killed, while Chief Ministerof Balochistan AslamRaisani, responding a question from a journalist in Islamabad made fun of Hazaras by offering to send a truckload of tissue papers to the bereaving families.

Three hundred Hazara students have stopped going to Balochistan University and around 250 Hazara college-goers have stopped due to fear of getting killed. Most Hazara university and college lecturers along with staff members have either left teaching or taken long-leave without pay due to life threat, thinking to leave if the situation doesn’t get well. Hazaras who were working in government or non-government offices in different parts of the Quetta city especially to the northern, southern and western sides have stopped going to the work due to the killing of hundreds of Hazaras in those areas. The movement of Hazaras have been marginalized and nearly 90% of Quetta city have now become no-go area for Hazaras.

Dozens of Hazara businessmen have either been killed or abducted for the last five years. Terrorists without being a fear of caught spray bullets on Hazara shops and get away easily. Due to killings, abductions and religious discrimination loads of Hazara businessmen have closed down their businesses and shops in and around Quetta city. Moreover, Supreme Court of Pakistan has also expressed its concern on kidnapping for ransom to become a trade.

The present government and law enforcement agencies seem to have thoroughly failed in complying with the article 25 (1) of the constitution by not capturing all those terrorists involved in the killings of Hazaras and bringing them to justice and Article-36: for being a thorough failure in providing protection and safeguarding the legitimate rights and interests of minorities. The killing of 800 Hazaras on nearly daily basis is one of the biggest proves of the failure of the present government and law enforcement agencies. Supreme Court of Pakistan verifies that the federal government failed to discharge its duty under Article 148 (3) of the Constitution because it could play its role in cooperation and coordination with the provincial government to control and maintain law and order in Balochistan.

Now, Hazaras are under siege in its vicinity in Quetta City and they can’t go to colleges or universities to teach or get education in fear of getting killed. Most Hazaras have left their jobs due to the life threats. Hazara businessmen can’t carry out their business freely and customers avoid visiting Hazara shops in fear of getting killed. Hazaras can’t observe their religious rituals freely as Hazaras are considered infidels by the religious militant groups such as Leshkar-e-Jangvi, Taliban, Sipah-e-Sahaba, Jaish-e-Islam etc.

Non-Hazaras avoid keeping socialization with Hazaras going to restaurants and cafes in fear of getting killed, which means Hazaras have been marginalized and besieged on five fronts educationally, financially, religiously, ethnically and socially within their small vicinity and Hazaras have been left alone to die in Pakistan especially Quetta City. Many believe that Baloch insurgency and nationalist movement in Balochistan will keep prolonging Hazara killings in Pakistan until and unless Pakistan’s “strategic asset” policy towards religious militants doesn’t change.