It was around 9pm in Pakistan, almost a freezing night on Thursday 10th of January 2013 and I was talking to my cousin on Skype. While talking, he told me that he heard of an explosion and asked to ring me back after a while. After nearly an hour, when he didn’t ring me back, I rang to my in-laws on Viber in Pakistan to get some information about the blast. On my enquiry, my sister-in-law told me that twin-blast took place on Alamdar Road, Quetta and loads of Hazaras are believed to have been killed. The shocking news took the grip of the ground under my feet and I felt a chilled shiver in my spine. 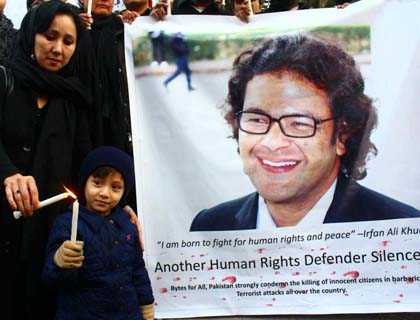 I was nearly numbed but brought my all energy together to ask about the well-being of all family members who she said “yes, all are save”. Without saying goodbye, I hung up the phone and immediately rang to my brother’s home who was not at home but her wife said that he was okay and had gone to the blast scene. I rang to my brother’s mobile number but he didn’t pick his mobile which multiplied my panic. Sensing the worst situation, I rang to my sister’s home who was screaming that the whole Hazaras are being exterminated through bomb blasts. I was unable to talk to her as she was continuously screaming on the phone. Later on, I rang to my father-in-law but I was unable to talk to him, as he also had gone to the blast scene to help the victims.

On the Internet Pakistani newspapers further confirmed the twin-blast on Alamdar Road Quetta, which initially reported ten dead bodies. I couldn’t believe in the news reports so I decided to ring to my friend in Pakistan to get the real situation. My friend on the telephone took me aback with the news that over 80 Hazaras are believed to have been killed in the twin-blast. I couldn’t believe on my ears but he was telling me that the first blast took place in a snooker club, which resulted in few deaths and injured.

When people around the vicinity heard the blast they rushed to the blast site to help the victims but soon another big bang, which made the colossal damage. Police personnel, news reporters and ambulance drivers were also among the dead who were trying their best to help the victims of the first bomb blast. I was unable to say anything, but my friend was saying that few teens were also among the dead. An emergency has been put on the three hospitals of Quetta city to provide treatment to the blast victims. It was hell like situation on Alamdar Road and in the hospitals. Everybody was rushing to the blast scene and hospitals either to get to know about their dear ones or to help the victims. Hazaras have been suffering for the last ten years but never experienced such a catastrophic. My friend was incessantly informing about the horrific scenes but I hung up the phone, perhaps, I didn’t have more courage to listen more.

After a while, I tried my best to recollect myself, went downstairs, straight to the kitchen, where my wife was busy in cooking something. I told her the shocking news; she got upset and rang to her father in Pakistan. While talking to her father she got shocked when her father told her that he had seen the dead body of Irfan Ali, 19 years old my cousin who I was talking few hours before. On hearing the news, I immediately rang to another cousin, who confirmed the news and told me that Irfan rushed to the blast scene to help the victims but he himself fell victim. I was shattered and the tears were rolling down of my cheeks for being so helpless to help my family members and community who are facing the worst kind of terror in so-called civilized world.

Next day, New York Times newspaper reported 100 plus killings, Asian Human Rights Commission termed the Hazara killings a continuing holocaust of sectarian cleansing, Human Rights Commission of Pakistan stated the callous targeting of members of the Hazara community in Quetta in two of those bombings on Thursday has caused the highest death toll for any sectarian attack in a day in Pakistan so far, Human Rights Watch declared massacre of Shias in Quetta provides damning indictment of authorities, Ban Ki-moon UN Secretary General in his statement condemned ongoing terrorist violence and multiple attacks in Quetta, William Hague Foreign Secretary UK was saddened to hear of the brutal terrorist and sectarian attacks in Quetta, US declared extremist attacks in Pakistan “senseless and inhuman”. Including China, the dreariest friend of Pakistan, ten other countries also strongly condemned the terrorist attack on Hazara Shia in Pakistan.

Hazaras staged peaceful sit-in protest with86 dead bodies on Alamdar Road for continues 72 hours and hunger strike in Quetta with the support of the civil society all around the world especially Pakistan. The unprecedented peaceful protest forced the federal government to remove Balochistan government and installed the “governor rule” in the province.

Despite the change of the government in Balochistan, the question is now whether the present governor has the capability to implement law & order in the province and to provide full protection to its citizen especially Hazara community? I think, the near future will find the best answer.

The writer is a permanent columnist. He can be contacted attoyounasat@yahoo.co.uk and tweets @toyounasat