The blast in Quetta was the worst attack since a series of bombings in the city at the start of the year killed almost 200 people, briefly drawing global attention to a growing campaign of persecution of the Hazaras by sectarian militants. 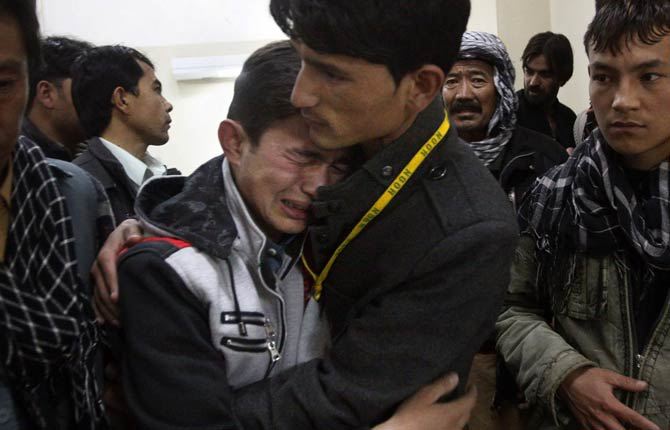 The 500,000-strong community in Quetta has been subjected to an escalating campaign shootings and bombings by Lashkar-e-Jhangvi (LEJ), a militant group dedicated to attacking Pakistan’s Shi’ite Muslim minority, which includes the Hazaras.

Khaliq Hazara, the chairman of the Hazara Democratic Party, the main Hazara political organisation, said the blast occurred shortly after he had finished addressing a small outdoor election meeting in a Hazara enclave in the east of the city.

“I was doing my campaigning in my own community,” Hazara told Reuters. “The government should give us security.”

Hazara, who is running for a National Assembly seat at the May 11 elections, said he suspected the bomber intended to kill him and his advisers. “We were the target,” he said.

LEJ’s spokesman claimed responsibility for the blast via telephone from an undisclosed location, though he did not specify whether the HDP leader was the target.

The HDP is a secular party that has emerged to press Pakistan’s government to take greater action to protect Hazaras from attacks that have killed hundreds of people in Quetta in recent years. The party’s previous chairman was shot dead in the city in 2009.

The proximity of the blast to the HDP gathering will fuel fears that Islamist militants are determined to disrupt campaigning by secular parties ahead of the polls, Pakistan’s first transition between elected civilian governments.

The suicide car bomber detonated his explosives-laden vehicle after being stopped at a nearby checkpoint manned by the paramilitary Frontier Corps, according to a security official. He said a member of the force was among the dead.

LEJ’s activists subscribe to the hard-line Takfiri Deobandi school of Islam, which is followed by a small minority of Pakistanis. The most violent members see it is a sacred duty to kill Shi’ites, who are known in Pakistan as Shias.

Hazaras are both Shi’ites and members an ethnic minority who originally migrated from Afghanistan, leaving them vulnerable to a double layer of discrimination.

LeJ’s campaign of violence against the Hazaras has placed the community under siege in Quetta, leaving many people afraid to venture out of Hazara enclaves and disrupting business and education. Thousands of Hazaras have fled Quetta to seek asylum in Europe and Australia rather than face LeJ’s death squads.

In a separate attack on Tuesday, a bomb exploded in the commercial capital Karachi near a gathering of activists of the Muttahida Quami Movement (MQM), the dominant political party in the city. Police said two people were killed.

The MQM, a secular party, is locked in a battle with various rival contenders for influence in Karachi, including Pakistan’s Taliban movement, which has sought to gain a foothold in various districts on the outskirts of the city in recent years.

The worst attack on an election event occurred last week when at least nine people were killed in bomb attack on a rally held by the Awami National Party in the north-western city of Peshawar.

The ANP, a secular party, is locked in a bitter struggle with Pakistan’s Taliban movement, which has staged numerous attacks on its members over the years and has vowed to step up its campaign in the run-up to the polls. (Writing by Matthew Green; Editing by Jon Hemming)