We condemn the discrimination against Sikhs and Hindus of Afghanistan

In a racist action, the parliamentarians of Afghanistan refused the allocation of a single seat in the parliament for the Sikhs and Hindus minority group. Although the Sikh and Hindu people of Afghanistan have passed a long way of suffering for their religion but they are still discriminated against.

Recently the Afghanistan Parliament has passed the election bill, which was under discussion for a long time because of its controversial articles regarding allocation of seats in the parliament for the vulnerable categories such as women and religious and ethnic minorities. The bill is passed by both houses of the parliament and is awaiting Karzai’s signature to be put in act. 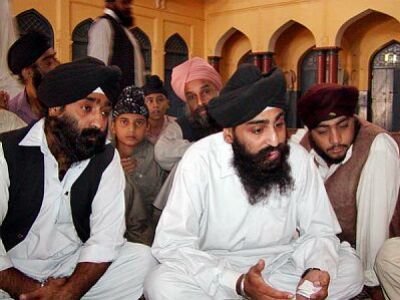 The vulnerable categories were listed in the proposed bill as the women, the Kochis (nomads) and the Hindus and Sikhs.

The allocation of certain number of seats for Kochis and for women was approved but the Sikhs and Hindus of Afghanistan remained with no seats, which is a sign of religious discrimination against a group of the citizens while in the constitution of Afghanistan, the citizens are guaranteed equal rights and opportunities regardless of their ethnicity, race and religion so, if they women are considered vulnerable, they Sikhs and Hindus are also vulnerable and there numerous of proof cases for this fact.

In the constitution of Afghanistan there are articles such as 2nd, 6th, 22nd and 24th that emphasize on freedom of religions for non-Muslims and then equal opportunities for all citizens of the country that should be guaranteed by the government.

Afghanistan is a country with an absolute majority of Muslims but we have Sikhs, Hindus and Christians who are considered as very vulnerable religious minority groups and need to be protected, given equal opportunities and fair treatment as every other citizen in the country, and in some cases they have to be given compensatory opportunities for their long sufferings because of discrimination against them.

Afghanistan is a home for different ethnicity and different cultures and our Sikh and Hindu fellows, not only have the same rights as every one else, but they should also be given more opportunities and be compensated for all injustice and misbehavior conducted against them through the years, that forced them limit their religious practicing, lose their wealth and properties. They were also very badly tortured by the Taliban during 1990s.

Most citizens of Afghanistan know that millions of Afghanistani people are around the world as asylum seekers and refugees and tens of thousands of them have already obtained citizenship from European countries, from the USA or Australia and are enjoying the justice, fair treatments and equal opportunities in their new countries, but the way our politicians still think within the country is very stinky and disturbing; they discriminate against a religious minority of their own country in a very bad manner.

They have served in the military when it was an obligatory service and have paid all their dues to the country as everyone else; it is not fair to discriminate them for their religion and culture.

In this regard Kawa Gharji an Afghanistani journalist in exile and a writer for Kabul Press has posted an ironic post on his Facebook Timeline as below;

“No Pain No Gain!

As the Sikhs and Hindus of Afghanistan did not participate in the glorious civil war and did not destroy schools, did not blast themselves, did not conduct suicide attacks, did not cultivate opium and other dangerous narcotic substances, so their quota of parliament seats will be given to the hardworking Kochi brothers.

This quota is given to the Kochis to thank them for their day and night efforts in destruction, annually attacks on Behsud, burning the farms, destroying schools, threatening school girls and women, putting remote-controlled bombs on the roads, prohibiting and divesting more than 70,000 students from education and killing the innocents and dragging their bodies on the ground by horses.

The Islamic Republic of Afghanistan has given a chance to the Sikh and Hindu citizens of the country, to prove themselves with the above-mentioned standards but they have failed the criteria. So they did not deserve a seat in the parliament.”