There is a group of women in India called „Gulabi gang“ (pink sari) that has found a special way to fight against injustice and discrimination.

This group was founded in 2006 by Sampat Pal Devi, a mother of five and former child bride, as a response to the violence against women, corruption and social injustice.They wear pink saris and wield bamboo sticks to defend themself and to convince violent men.

This group now has more than 20,000 members, and the number is growing. Sampat choose the pink color because this color can not be affiliated to any political group.
The „Gulabi gang“ teaches us what determinated women can do. 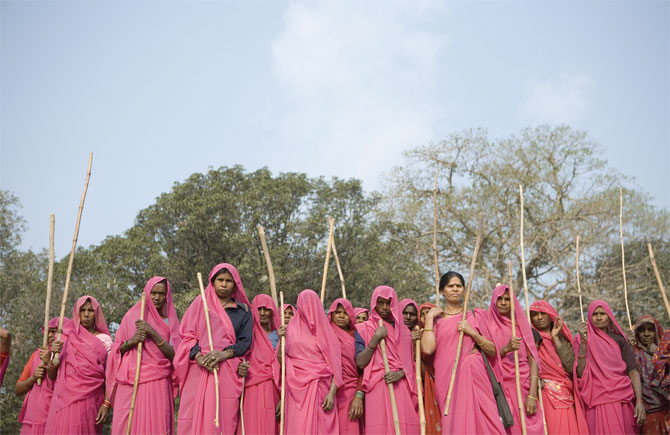 The women of this group are not nice, kind and silent, they are not the „female stereotype“, they are real warriors and it’s also for this reason that people respect them.

The gang paid visits to abusive husbands and demanded they stop the beatings.

When obstinate men refused to listen, the gulabis would return with large bamboo sticks called laathis and “persuade” them to change their ways. Sometimes they also stopped child marriages and protested against female illiteracy. Their most daring exploit was to hijack trucks laden with food meant for the poor that was being taken to be sold for profit at the market by corrupt officials.

The italian patriot and philosopher Carlo Cattaneo, said that „who has the right doesn’t thank“ and I add that who has the right doesn’t say „please“. These women don’t ask anyone to respect their rights, they pretend that their rights are respected, because they are free; in fact all the rights have just one mother: freedom. Without freedom there are no rights, but freedom is not a gift, is a conquest. We have to learn to be free every day and fight against people who want us slaves.

There are a lot of ways to fight against discrimination and injustice, this is just one of that ways. Every period, society and country has its best way. Important is to fight togheter, because sometimes the worst enemies of women are not men but the women themselves. Gulabi Gang is a perfect example, is the miracle that happen when women fight together for a common cause.