The attack on the Hazara community in Qu 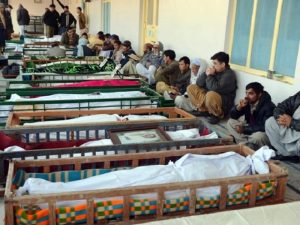 etta last month, which left 10 dead and many injured, comes amidst the recent spate of violence against an intensely vulnerable and ghettoised community. Pakistan’s new theatre of sectarian killings, the troubled province of Balochistan, is turning into a parable of disastrous policies that are being pursued ostensibly to bolster Pakistan’s national security. Since 2009, such attacks have become the norm and the worse impunity of attackers underlines state complicity.

In early 2013, two bombings targeting Hazaras in Quetta killed over 180 people. The community sat in freezing cold for days with the dead bodies of their loved ones, waiting for effective action by the state. Nothing came out of that except assurances, token arrests and high-sounding platitudes by opportunistic political parties. The truth is that the infrastructure for sectarian hatred has grown right under the nose of security agencies. This terrorist infrastructure is inextricably linked to militant bases in Punjab, patronised by a spineless provincial government and a fast radicalising state apparatus that has accepted the power of those who preach hatred and execute their brazen agenda through target killings. No judge or prosecutor has the courage — and why should they put themselves in the line of fire — to curb and punish these networks. The political class, eager to appease rabid clerics and right wing business lobbies, continues to build metro buses or hold rallies while graveyards fill up with lesser citizens of the Shia, Ahmadi or Christian variety.

What is driving these brutal attacks? First, the well-known armed groups operate as part of the failed strategic doctrines of the past. Successive governments have considered the existence of such groups as part of the larger ‘national security’ apparatus for reasons, which have been documented and debated ad nauseam. Is there a change given that there is now a concerted effort to fight the Pakistani Taliban? Only time will tell, but eliminating the Taliban without neutralising their sectarian allies will at best be a partial remedy to a complex situation.

Second, the plight of the Hazaras is simply a replay of what happened with the community in the 1990s when the Afghan Taliban attacked numerous villages and eliminated hundreds of them. Supporting such ideological ventures abroad has evidently backfired. The ideological machinery is functioning well across the country.

Third, state inaction is also related to the weakening capacity of the criminal justice system during the past two decades. General (retd) Musharraf tinkered with the administrative system, including police functioning; however, without national consensus, these reforms could not be fully implemented. As a result, the administrative structures in the field have weakened. The judicial system, despite the optimism generated by the lawyers’ movement, has not shown signs of improvement. In fact, Pakistani courts with overall low conviction rates are widely perceived as soft on terrorism cases. This is why few sectarian leaders have ever been convicted. Thus far, none of the attacks on Hazaras have been accounted for. A culture of impunity has turned into a norm.

Fourth, the regional conflict since 2001 has fed into sectarian conflict. Al Qaeda, on retreat from Afghanistan and Pakistan’s tribal territories, has found reliable allies in sectarian militant networks. Much of this was transacted through the Pakistani Taliban, whose area commanders and a substantial number of foot soldiers have been supplied by the sectarian killing machines. Therefore, today, al Qaeda, the Taliban and sectarian outfits have metamorphosed into a violent trinity, with growing grass roots strength. The Punjabi Taliban have recently been whitewashed as they will join the Afghan jihad.

The fifth factor pertains to Pakistan’s enduring material-ideological alliance with Saudi Arabia and its regional agenda. Saudi concerns about Iran are historical. Now, private funds flow into the madrassa-militant network. This continues unabated with little or no reflection within the Pakistani state. The generous Saudi donation to Pakistan’s state bank earlier this year did not come without an ideological alliance.

Hate speech and freedom to promote sectarian hatred is the sixth factor. Since the late 1990s, after the backlash of cracking down on sectarian outfits, the state has chosen to adopt a policy of non-intervention. There are laws on the statute that prohibit misuse of loudspeakers and inflammatory walk-chalking, but these are rarely enforced. The result is that many mosques across the country preach sectarianism. Recently, a letter to the editor in Dawn by an exceptionally brave reader Salahuddin Mirza complained about how a mosque leader in Karachi’s posh Defence area was preaching sectarian hatred and treason. In addition, the Friday sermon was praising the Taliban and al Qaeda. If this is the case in Karachi, one can imagine what happens in the rest of the country.

Radicalisation of law enforcement officials is now a palpable reality. Mumtaz Qadri’s case is perhaps, the best known, but across the country, the police, judges and other state functionaries demonstrate worrying signs of bias, ideological posturing, and in rare cases, direct violence. Just a week ago, a police sub-inspector killed a prisoner in a Gujrat police lock-up due to his allegedly blasphemous remarks. Judges have also shown fear and sometimes bias influences their decisions. But all this is not limited to civilian administration. Suspicions that the 2011 Mehran Base attack may have had some inside help and the most recent brazen attempt to hijack a vessel are worrying signs. Senior officers with links to the Hizbut Tahrir have been tried by the military. State officials are influenced by society and we have turned the country into a cesspool of ideological confusion with vague theocratic aspirations.

Finally the media: TV hosts known to have aired shows with express religious hatred have gone up the ladder; columnists building support for Talibanisation are celebrities and there is a general tendency to underplay or obfuscate the killings of minority groups. In fact, Christians don’t even deserve attention as the usual refrain is that ‘Muslims, too, are under attack’.

It is not clear if Pakistan’s elite have a game plan to address this menace and even appreciate its potential consequences for the future stability of the country. Dozens of reports and commissions have made suggestions, but the surreal apathy and short-termism of politicians have made matters worse. It is time for civil and military authorities to review where we are headed and take corrective measures before it is too late and violence gains further legitimacy and acceptance.