By admin
0 355 1
Rough Crossing
———————-
Fleeing persecution, a group of ethnic Hazaras set out for Australia by sea. One of them documented the harrowing voyage with a camera.
By Lynne Minion

As he stepped onto a boat on the Indonesia coast, Barat Ali Batoor knew he might not survive the voyage to Australia. But it was a risk he says he had to take.

“It was not an easy decision for me,” says Batoor, 31, who proved luckier than many who brave the high seas in search of asylum or opportunity. “There was a 90 per cent chance of dying there in the sea. I was taking the risk. But it was just for that tiny bit of the hope. Because we didn’t have that hope back home.”

The hope was that he might reach a place where “I can live in peace and I can help my family to be in peace.”

Batoor’s family are Hazaras, a Persian-speaking minority who have endured persecution in Afghanistan and Pakistan. But his work as a photojournalist put him at an even greater risk, ultimately compelling him to take his chances at sea.

“As a photojournalist, I always want to document the things happening around me,” he says. “And this time it was happening to me.”

On the boat bound for Christmas Island, Batoor filmed and photographed his fellow asylum-seekers and the terrifying infinity of the Indian Ocean. He says he knew he could be documenting his own death.

“As a photojournalist, I always want to document the things happening around me. And this time it was happening to me,” Batoor says. “I knew that it had never been documented and visualized. It was on paper, in words written and presented by narrators who have never seen videos or the journey, so I wanted to document it, to visualize it.” 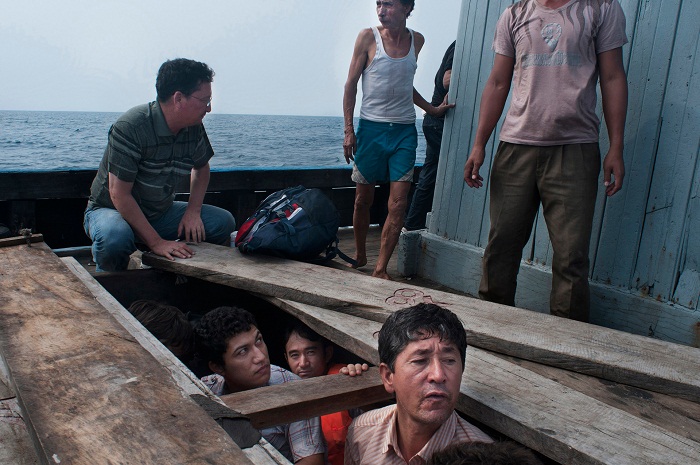 The dangers of the voyage were no secret. Indeed, friends of his had died on the way.

“When I got to Indonesia, on my third day, during my first week, three of my roommates fled to Australia. They were offered this perilous journey, and took the boat. After two days we heard that the boat had capsized and my roommates were on board. Two of them died and one was rescued.”

Still he embarked on the journey too, describing the reasons as “very simple”.

“I didn’t have any other choice. Legal things are not possible. Afghani passport is not reliable anywhere, like I can’t get a visa for any country with that. And plus, there was not any other option for me except the smuggler – to pay them and to take the illegal route.”

“There was not any other option for me except the smuggler – to pay them and to take the illegal route.”

Batoor was born and raised in Quetta, Pakistan, but moved to Afghanistan as a young adult hoping to help rebuild the country. He found work as an interpreter and photographer for the United Nations, the U.S. Embassy and several European news organizations.

He struck a nerve with his exposé on the coercion of Afghan boys into a life of sexual abuse. Some of the former warlords who were involved in the practice became aware of his photo essay soon after it was published in The Washington Post in April 2012. He began to receive death threats, he says, and realized he had to go.

Batoor went back to Pakistan, but as an ethnic Hazara did not feel any safer there. “I could be killed any time and very easily,” he says, so he paid smugglers US$ 8,000 to get him to Thailand, Malaysia and then to Indonesia.

The boat to Australia cost a further US$ 6,000, but he hoped it would land him in that peaceful place.

“The first day and night we were hopeful that we would make it to Australia, to Christmas Island. But the second night, when the weather turned and the water got rougher, the condition of our boat was really miserable.”

“The water was coming in and the waves were high and the boat felt really weightless. Like a matchbox in that water.”

Batoor’s photographs and video footage show the terrifying scenes as the boat began to leak and the water pumps failed.

“The water was coming in and the waves were high and the boat felt really weightless. Like a matchbox in that water.”

Passengers began to cry and pray.

“We really did not have any more hope. We, everyone, 93 people, everyone, we thought that this is the end. And we could feel, or we could see our death just riding from the point in front of us. We could not see anything else, it was just only those high waves and everywhere it was only water. It was a really lost hope.”

As the weather turned rough, a fellow passenger tries to flag down another boat for assistance – a scene Batoor captured on video. Barat Ali Batoor

All 93 were lucky to survive.

The boat crashed onto rocks on a small island off the coast of Java and everyone on board swam to shore – Batoor’s camera was ruined but his memory card survived, “It was a miracle.” The asylum-seekers were then arrested by Indonesian police and taken to a detention centre. They all escaped on the first night.

A traumatised Batoor waited in Jakarta for his claim for refugee status to be processed by UNHCR. With the help of sponsorship by war photographer Tim Page, who had worked with him in Afghanistan, Batoor was able to resettle in Australia.

Now living in Melbourne, Batoor has reached audiences worldwide with his photographs and footage, vividly showing the risks asylum-seekers take when travelling by boat. In 2013, one of the images won the prestigious Nikon-Walkley Award for Photo of the Year.

Communicating the stories of asylum-seekers and refugees has now become his life’s journey.

“I have peace, I have opportunity, I have almost everything,” Batoor says. “But I feel the responsibility that I have to fight for them. Definitely I do feel the burden.”