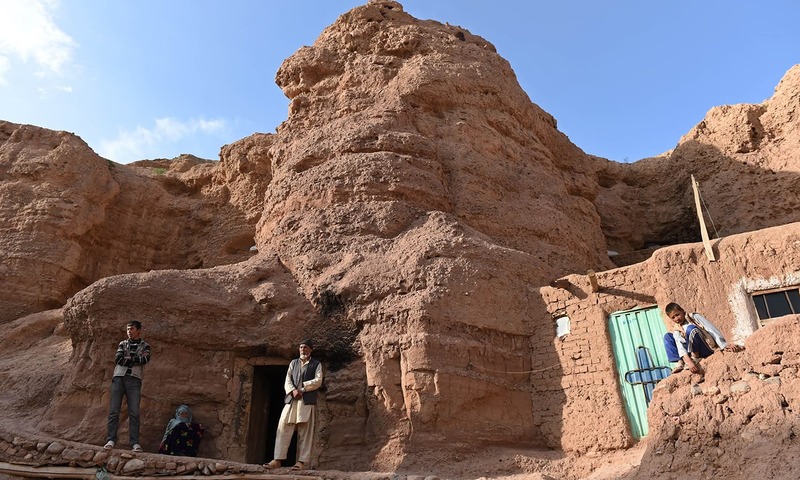 In this photograph taken on June 19, 2015, a Hazara family stands in front of their cave in the old city of Bamyan, some 200 Kilometers (124 miles) northwest of Kabul. -AFP

BAMIYAN: Carved into dun-coloured cliffs, hundreds of man-made caves situated next to empty niches that once sheltered giant Buddha statues destroyed by the Taliban are home to Bamiyan’s poverty-stricken who have nowhere else to go.

With no electricity or running water, the cave dwellers are forced to adapt to an arduous existence in these dark, dank, and musty structures.

“It’s not a good place, it’s never been a good place to live,” said Haji Hussain, who has been living in a cave atop a cliff with his wife and three children for thirty years.

“It’s very difficult to climb up here and then come back down. And as far as water is concerned, it’s a big problem. We have to carry it on our back to bring it up here,” the labourer told AFP in his cave, just a few hundred metres from the vacant niches. 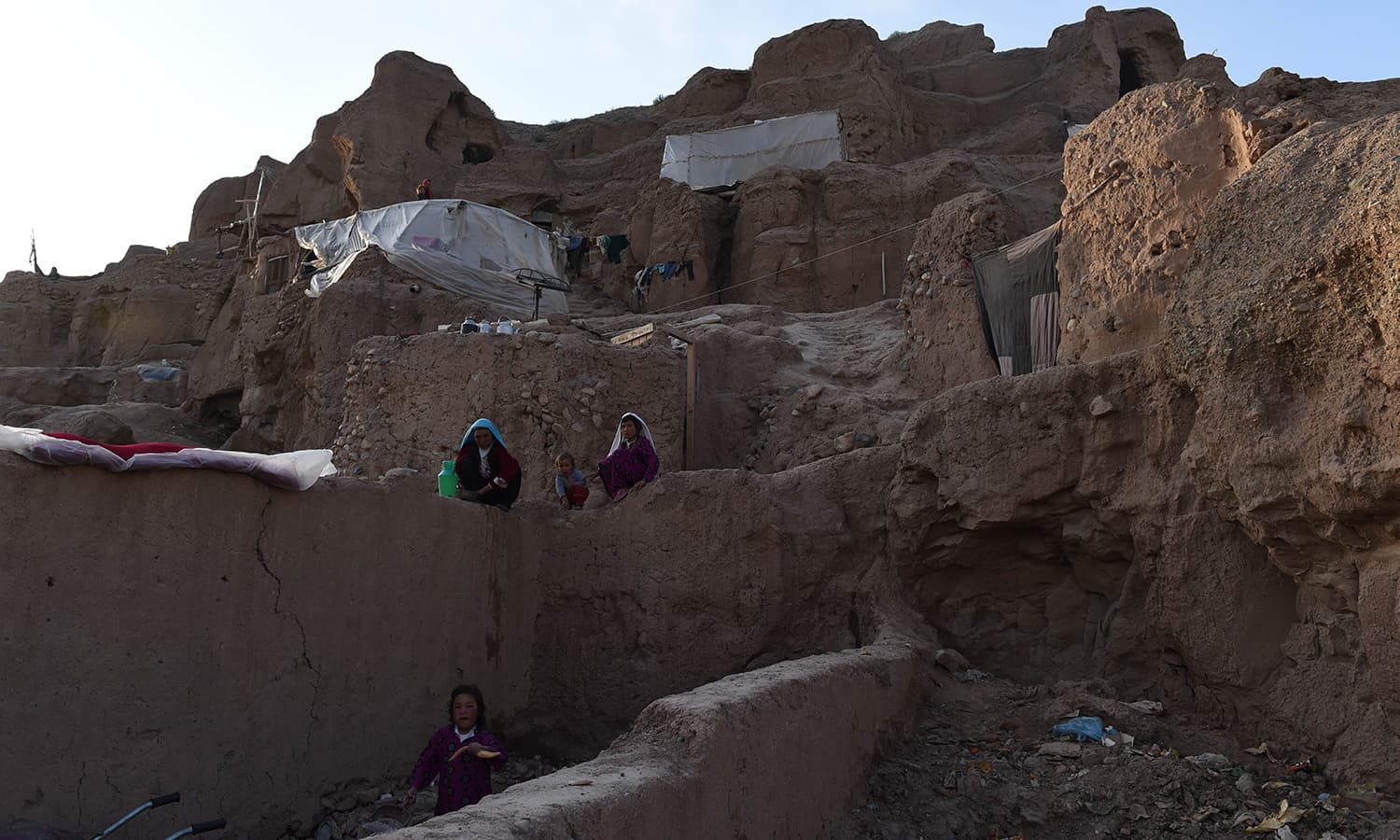 In this photograph taken on June 19, 2015, a Hazara women wash dishes in front of their caves in the old city of Bamiyan, some 200 kilometres (124 miles) northwest of Kabul. ? AFP

Like Hussain, hundreds of families dwell in the caves of Bamiyan, a rare oasis of tranquility that has largely been spared the wrenching conflict that afflicts the rest of Afghanistan.

When the Taliban captured Bamiyan in the late 1990s, some of these people lost their homes as the hardline Sunni movement burned down the houses of the predominantly Shia Hazaras, forcing them to take shelter in caves right next to the Buddha statues.

But two years after the Taliban regime was toppled in the 2001 US-led invasion of Afghanistan, the area was declared a World Heritage Site by UNESCO.

The government came down heavily on the cave dwellers, evicting many and moving them into temporary shelters elsewhere in the city.

Local authorities argue that the longer the structures are occupied, the more damage is wrought on the site as some families install doors, windows and build makeshift extensions.

“If the people live here, they damage the caves and ancient murals, and we should save these structures,” said Kabir Dadras, head of Bamiyan’s information and culture department.

Some 250 families have been evicted from the caves in recent years but many still remain. 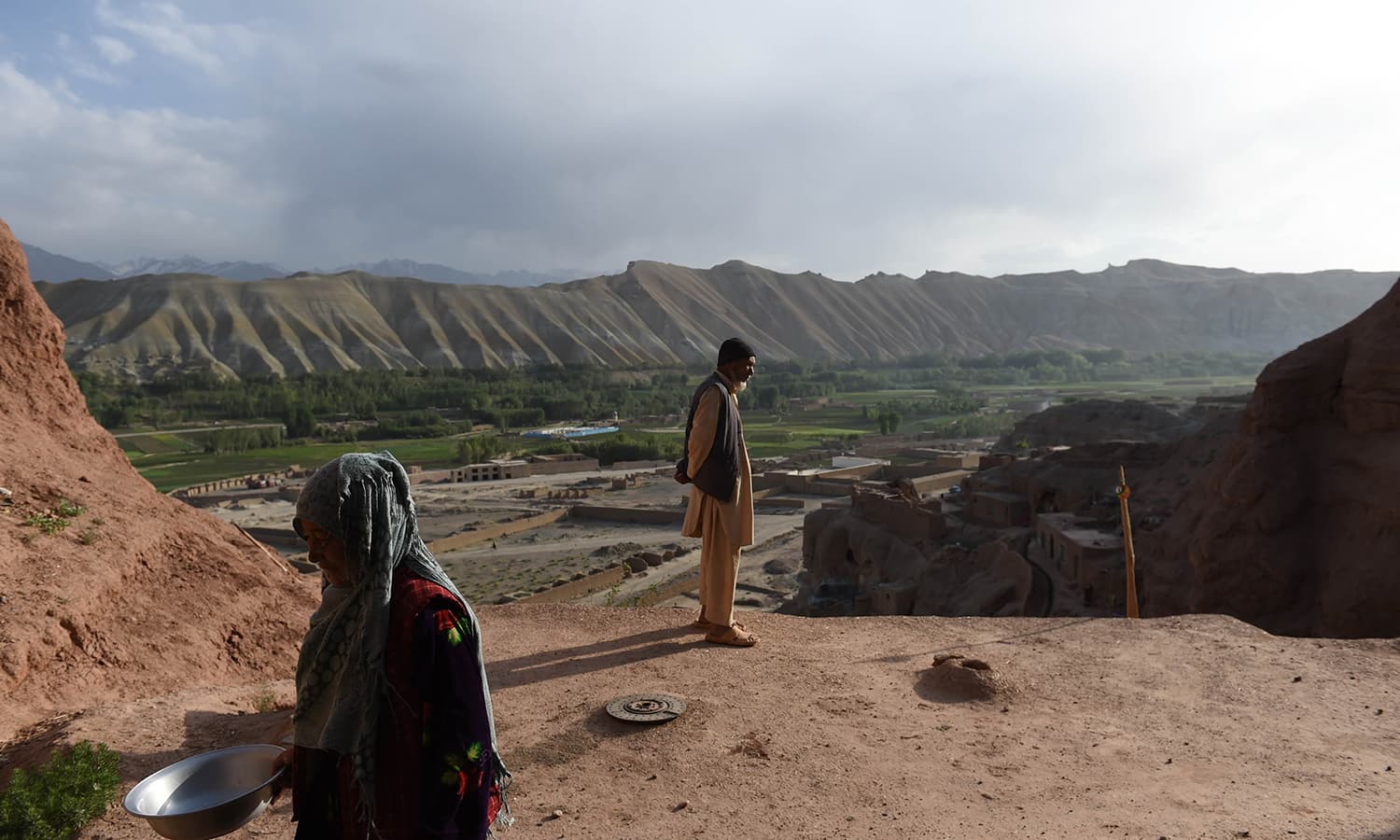 In this photograph taken on June 19, 2015, a Hazara Afghan couple are seen in front of their cave dwelling in the old city of Bamiyan, some 200 kilometres (124 miles) northwest of Kabul. ? AFP

Once a caravan stop along the fabled Silk Road, the central Afghan city was recently named this year’s cultural capital of South Asia, igniting hopes of restoring its place on the global tourism map.

But the government is struggling to revive the heyday of tourism after decades of war, including the Taliban’s 1996-2001 reign when they destroyed the Buddha statues, labelling them an affront to Islam ? an act globally condemned as “cultural terrorism”.