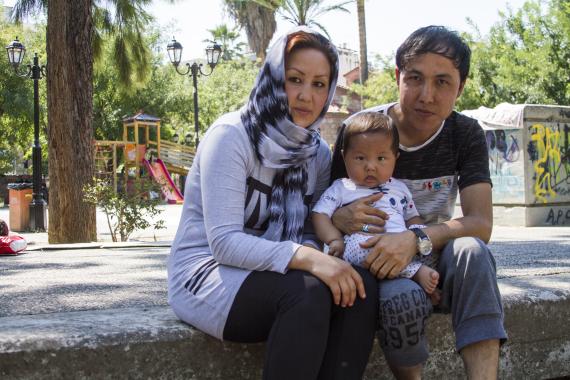 Abous, right, his wife Huma and their six-month-old son Batroun sit in a park located on the Greek island of Lesbos where thousands of refugees from war-torn countries arrive daily. Photo: Tyler Jump/IRC

Abous* left his home in central Afghanistan in late August, trekking by foot with his wife and six-month-old son through Iran and Turkey to reach Europe. They traveled nearly 3,000 miles from a country where decades of war and poverty have created one of the largest exoduses in history.

After Syrians, Afghans make up the largest group of the more than 380,000 people to have arrived in Europe by sea this year, according to the United Nations refugee agency. Some 40,000 Afghans have sought refuge in Europe this year alone. There are 2.6 million Afghan refugees, almost 10 percent of the country’s population, scattered in neighboring countries such as Iran and Pakistan.

“Afghanistan has a government, but there’s still a lot of insecurity,” says 33-year-old Abous, a member of the ethnic minority group Hazara who live in the central region of the country. “People die every day—they’re being threatened, kidnapped by the Taliban.

According to Abous, there are two reasons why people flee Afghanistan: insecurity and unemployment. Abous had a stable job working as an English teacher while his wife, Huma, worked as a midwife, but both had a glooming sense of the future.

“We wanted to save this little man especially,” Abous says, holding his smiling son, Batroun. “His name means victory.… We want him to study and be happy, so we needed to be quick to save him as soon as possible.” 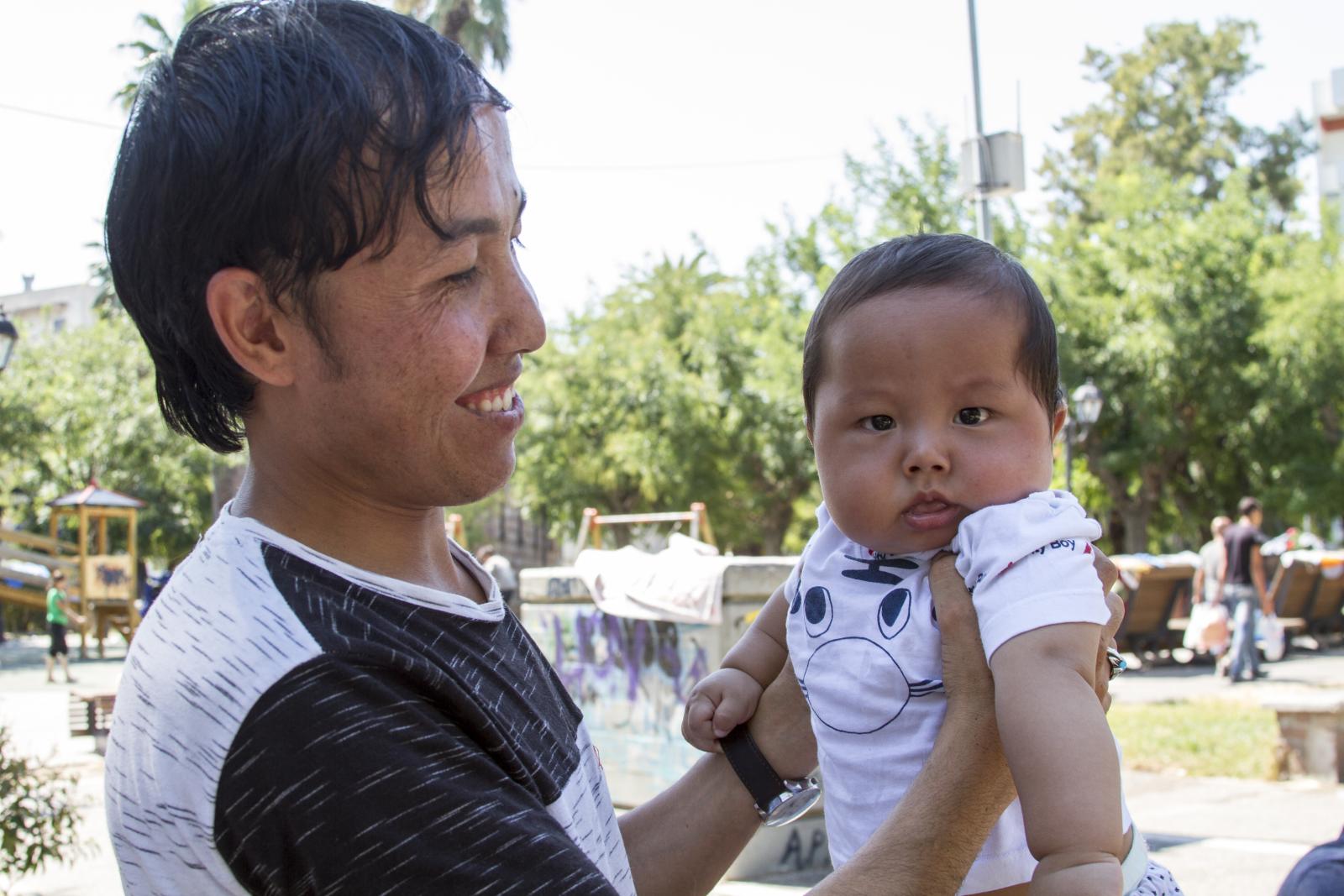 “My baby was very calm,” says Abous. “He didn’t cry at all, but I was afraid for him. I used to have nightmares about losing my family.”

By land and sea

Taking their modest savings, Abous and his family set out on their exhausting journey with just one bag containing a few outfits for the baby, a loaf of bread and a bottle of water.

Most people walk over the border into Iran and then drive to Turkey. But to avoid detection, Abous and Huma decided to hike through the mountains with about 150 other Afghan refugees, mostly women and small children who were crying from hunger and thirst.

“There were many days and nights we stayed hungry and thirsty, standing under the sun,” Abous recalls. “I had the bag on my back and our baby in my hands. We were so tired. We fell sometimes because there were no lights and we tripped over the rocks.”

Once in Istanbul, the family rested for a few days before taking a bus to the port where many Syrian and Iraqi refugees embark on the perilous journey to Lesbos, Greece. It took them 80 minutes to cross the Aegean Sea in a small crowded dinghy, with little Batroun happily bouncing in his father’s lap.

“My baby was very calm,” says Abous. “He didn’t cry at all, but I was afraid for him. I used to have nightmares about losing my family.”

Generous locals welcomed the family once they landed safely. But they were in for another laborious task, a 40-mile hike to Mytilene, the capital of Lesbos where the International Rescue Committee is providing critical water, sanitation and registration services. Abous and Huma walked for more than 20 hours before catching a bus carrying new refugee arrivals.

In Mytilene, where thousands of refugees were waiting days to receive transit documents, the IRC is helping local authorities coordinate the processing and registration of thousands of refugees. Abous and his family found shelter in a local park packed with thousands of other Afghan families (but flanked by an array of cafés). Abous stayed up most of the nights to make sure his son wasn’t bitten by mosquitoes. They stayed on the island for five days before receiving transit papers to travel to Athens and then on to any country that would welcome them.

“I want the same human rights for my family as other people,” he says. “That’s why I left my country. Humans were killed worse than animals. What we want is [dignity and a chance to succeed].”