Afghanistan: An Urgent Need to Resolve Conflicts Through Logic and Reasoning 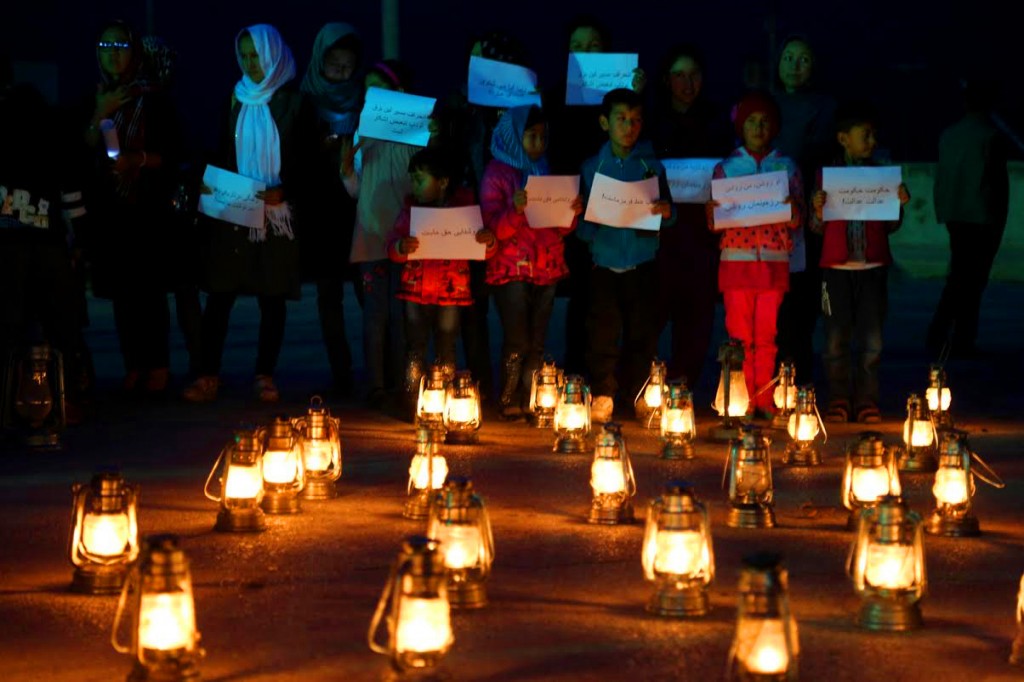 Let us not change affluence into infliction
A comprehensive overview to TUTAP
First, we need to know that a successful government is one that accepts logical findings. It is never wrong if a democratic government brings reforms and listens to its people’s just demands, nor will it undermine its authority. In fact, a government’s authority and legitimacy is destroyed when their subjects’ calls are substantially disregarded or connived and suppressed, or the government submits to the forcible figures, so that, any powerful body or group who utilizes power as a means to reach their legitimate or illegitimate ends, enjoy more from the impuissant and indecisive government, thereby, institutionalizing exaction and violence.

Reasoning and its institutionalization should have a strategic importance to the pleaders. Using force over the feeble and mismanaged government, may help them reach their goals, however, a wreckful tenor will be established, as a result, this new trend will provide for those with more power to win, not them.

Legal basis of dispute resolution
As a national covenant and the covenant of the government and people, the constitution of our country is the most significant resource to resolute this dispute. According to the constitution, the government is bound to consider economic growth, balanced development, facilitation of ground for more people to utilize public services, elimination of poverty and finally creating sense of integrity amidst the people, and to substantially avoid discrimination and deletion policies. Should the government fail to oblige with the constitutional provisions, these laws and principles- upon which we want to build a united government and an integrated people- will forfeit their potentials and effectiveness. 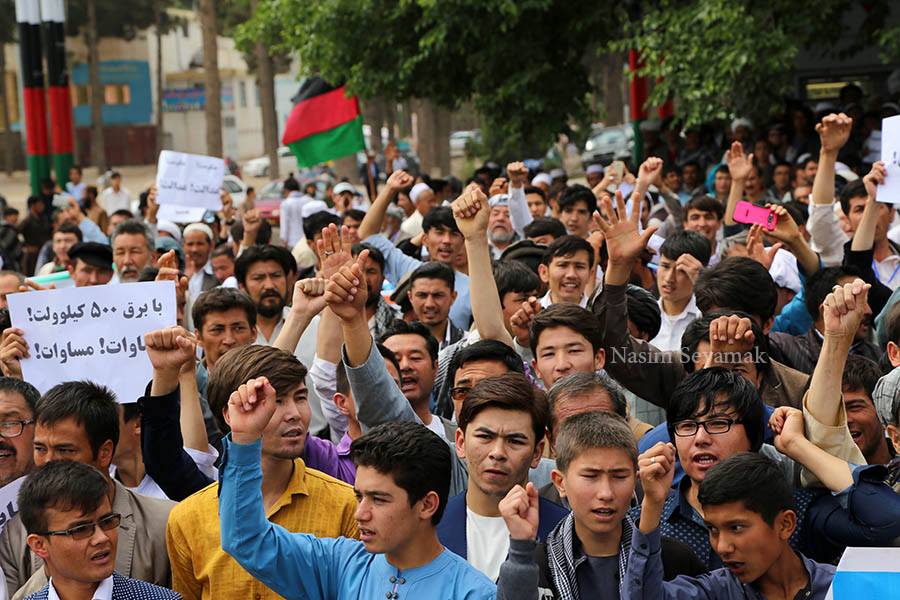 Also, the international economic organizations such as the World Bank and Asian Development Bank which generally are the financial supporters of such projects in Afghanistan, in accordance to their specific institutional rules, must first of all seek the local people’s opinions regarding the implementation of their development projects, and secondly, these projects must be implemented to consolidate and accommodate human rights, not to extend injustice and discrimination. In fact, those who understand the role of Human Rights in international relations believe that implementation of development and servicer projects by the international financial organizations is one of the most significant tools to expand Human Rights; therefore, they cannot neglect the humanitarian sides of such projects.

According to the mentioned resources, we need to explore that which of the routes best confirms to the targets of constitution and international organizations. Bamiyan or Salang route:

1. Citizen’s More Access to Electricity Services
Due to its substantial role in humans’ lives, access to electricity is marked as one of the basic rights and necessities. Both sides agree upon this issue. Whether the 500 KV electricity line crosses Bamiyan or Salang, it would be divided into two lines, each 220 KV, in Arghande substation of Southwestern Kabul and transferred to Southern and Southwestern provinces of the country. Nevertheless, Parwan, Kapisa, Panjshir and Salang itself can benefit from the existing electricity line. In short, the mentioned cities do not necessarily require a second line. Therefore, transmission of the line from Salang will not increase people’s access to electricity, but the passage of the line from Bamiyan would increase peoples’ access to electricity in Tala & Barfak, Saighan, Kahmard, Darre Shekari, Bamiyan, parts of Maidan Wardak, and Parwan. In fact, by implementing the project, balanced development and social justice will be applied, which will lead to national integration and convergence, eventually elevating people’s allegiance to the central government.

Otherwise, adopting the opposite approach without rational and economic justification will be considered as sheer discrimination which is the seed of discord, divergence, and an act against human and constitutional rights.

In fact, no specific plan to transmit electricity to Bamiyan and central regions was purposed by the Brishna Company or the Ministry until 2032, hence, some regions of the country were literally treated as “deleted geography”. And as a consequence of the recent protest against this plan, i.e. elimination of Bamiyan and central areas from the master plan studied and prepared by the Fichtner Company, and its introduction as the 20 year electricity master plan of the country by the officials, the government vowed to transmit an electricity line to Bamiyan via Parwan province. 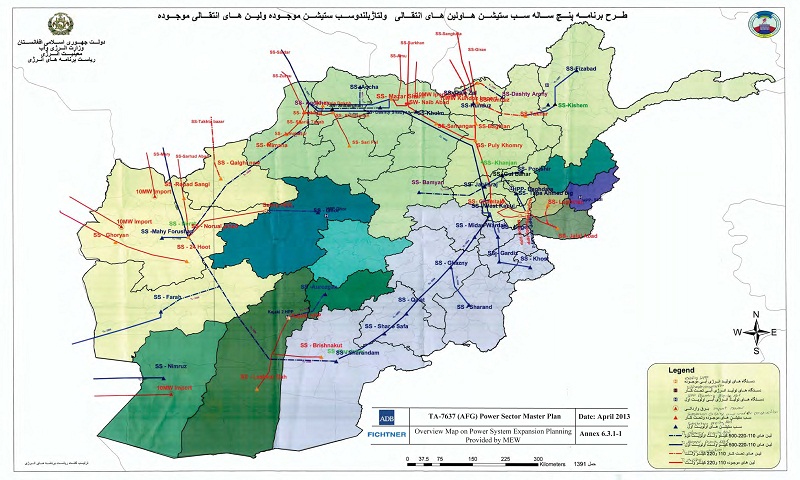 Firstly, based on the past experiences that people have, such promises of the government are not actually trusted nor can they be certain that these pledges will be put in practice, however. Secondly, as we will see, transmission of electricity through Bamiyan route will provide more output and will contribute much more to the national economy then the Salang route which will diminish the economic significance of the this project.

2. Less environmental dangers: the government is responsible to protect its civilians’ lives and to prevent environmental dangers. Transmission of two major electricity lines via a single route, passing over the local houses, will endanger the lives of the people by exposing them to rays that lead to cancer. A major field research took place in England to gauge the effects of such electric cables with the sample residents living within a one kilometer territory of 275 and 400 KV cables. The results revealed that children living within 200 meters are 69% more prone to cancer than the children living beyond 600 meters from the electric cables. Another harm of living in the vicinity of electromagnetic waves of such high voltage cables is its adverse effect on pregnancy and reproduction. I cannot forget one of my friends from Doshy saying: “in a point, the high-voltage electric cable has passed just from above my sister’s home.

I have not been able to sleep during the nights, since then. My sister also says that everyone is as concerned as I am.” Moreover, it damages agricultural lands of Charikar and Kohdaman. But using Bamiyan route will not impose such major threats on Salang, Doshy, and khenjan residents. This is a substantial peril which needs to be taken seriously. If it is not, then the government should rationally confirm it.

3. Strengthening National economy: the most important excuse of Brishna and the government officials is that the Salang route is shorter which makes it possible to lower expenditure and save more time. According to them, this reason has helped funders to favor the Salang route and therefore, the allocated budget suffices the implementation of project through this route only.
Also, the initial preparations have already been started, and changes will be chronic and may dissuade the funders.

However, experts, based on the experts of Fichtner Company, say: “Bamiyan is much safer for this transmission. It will enable infrastructure and establishments be made across the country and ease the need for new investments. According to the master plan designed by the Fichtner Company and confirmed by the government, this route, passing by some of the most important coal mines, will enable the generated thermal power connect and transmit through this channel. The expenditure difference among the two, considering the output, is zero. We can further explain this claim as following:

If the Bamiyan-Maidan route is selected to transmit the 500 KV electricity, around 42 million USD is required to build infrastructures and substations to provide energy for Bamiyan, Shahidan, Ashposhta, and Yakawlang provinces. And further detailed information is included in the Fichtner Company’s report. This means that supposedly, if we build 220 KV stations to meet the electric necessities of Bamiyan, around 40 million USD will be required to extend the line to the mentioned provinces.

Whereas, if this 500 KV line is transmitted via Salang route, around 87 million dollars of expenditure will be required to meet the necessities of those provinces (45 million USD to meet the expenses of transmission from Jabalussaraj to Bamiyan, and another 42 million to build infrastructures and substations) this means that if the 500 KV cable passes across Bamiyan province, our national economy will benefit about 52 million dollars.

This amount is exclusive of the expenditure required to build substations and junctions along the route. On the other hand, if the Bamiyan-Maidan route is selected, around 80 to 100 million USD will be required to connect the electric networks to the main network, from which we can conclude that around 80 to 100 million USD will be added to national economy if the latter is selected.

A more in-depth report of the expenses has been released by the Fichtner Company. Eventually, we can conclude that excluding the benefits of the above mentioned powerhouses, and considering merely the expenses of Bamiyan route project, at least 150 million USD will be added to the national economy, in a long run. Regarding to the concerns that are raised, we need to remind that during the implementation process of the project, if it is decided that the 500 Kilo Volt line must be transferred through Bamiyan-Maidan route, and no second bidding is required.

This is because that part of the transference line is shared by both the routes and for the remaining part of the route, the contract of the winner company can be legally changed in accordance with the new route, and this authority has been given by the law governing the project to the National Procurement office, which is functioning on behalf of the government. Secondly, this cunctation is basically the result of government’s mismanagement, and it is the government’s responsibility, not the people. Destruction of resources, which is also the reason of mismanagement of the government, cannot be acceptable to any upstanding citizen. 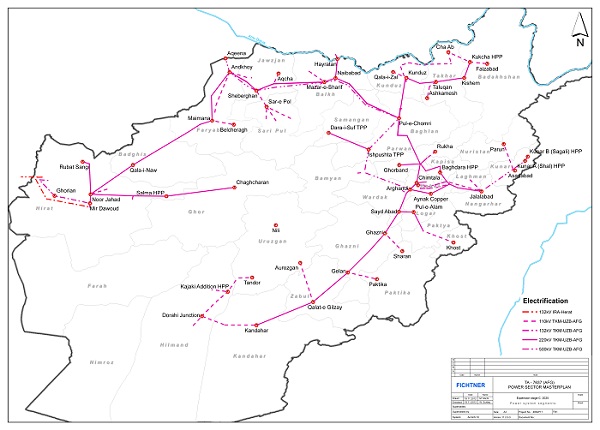 Transmission of electricity line via Bamiyan route will benefit national economy, national interest and specially the Kabul residents, eastern and Southern provinces, and even the peoples of Salang and Parwan, more than Bamiyan and the central provinces themselves.

In addition to being significant for the national economy- according to the report of Fichtner Company- the transmission of this line from Salang is replete with destructive peril as a result of adverse weather and geographical conditions, and if our Kabul, Eastern and Southern countrymen demand a stable electricity, they should defend Bamiyan route which is technically befitting. In addition to this, Kabul electricity will have to be temporarily disconnected, as the translocation of the existing electric pedestals of 220 KV or Casa1000 cables is possible, and many other potential difficulties at several stages of the execution process will be detrimental.

We can confidently assert that any reevaluation and study of this project by any authenticated organization will ultimately vote for Bamiyan-Maidan route. Further advantages of this route against other routes have been explicitly explained in Fechner’s report.

The company’s report is let out whilst, backtracking the law, Brishna Company has asked the Fichtner Company and the Asian Development Bank to design the procurement documents of the project for the Salang route. This reality has been clearly published by the Fetcher Company’s report. As a professional Company, Fetcher has explicitly notified that the Salang route plan-though utterly unprofessional- has been merely designed as per the demands of their patron i.e. Brishna Company, to avoid any responsibility in the future.

In the end, we have to say that there is no other way but accepting responsibility and apologizing to the people in case of mistakes. Hence, we expect that the government, along with the experts of the ministry, Brishna Company, Fetcher Company, people, and the all the funders to thoroughly scrutinize both, international as well as national documents and make decisions based on the principles of transparency and accountability.