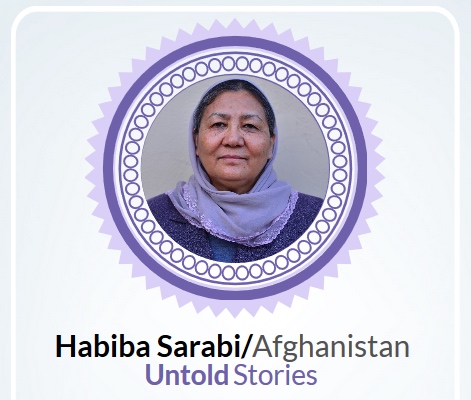 The N-Peace is a multi-country network of peace advocates in Asia seeking to advance Women, Peace & Security (WPS) issues. The N-Peace Awards were first launched in 2011 to recognize and profile women and men leaders and peacebuilders creating change at the grassroots to national levels in Asia. This award has three categories: – Untold Stories – women transforming their communities – Campaigning for Action – women and men mobilizing for peace at the sub-national levels – Peace Generation – young women and men building peace through volunteerism.

This year this important award, under Untold Story Category, has been won by six women and one of them is an hazara hematologist, Habiba Sarabi. She has been the first woman to become governor in Afghanistan. She has been governor of Bamiyan from 2005 to 2013.

During her time as a Governor of Bamiyan, Doctor Sarabi promoted the cultural heritage of the ancient city. She also established the Band-e-Amir National Park of Afghanistan in Bamiyan and, for that, Time Magazine recognized her as Hero of the Environment.

In 1996 during the Taliban regime she was forced to flee to Pakistan with her children. In Pakistan Dr. Sarabi worked at many humanitarian organizations and she started secretly teaching in refugee camps, mainly teaching to girls. After the fall of Taliban regime, Dr. Sarabi did not only serve as the governor of the Bamiyan but she also served as the Minister of Women’s Affairs and the Minister of Culture and Education. She later became the advisor on Women’s Affairs and Youth to the Chief Executive Officer. Today she is one of the female deputies of High Peace Council.