Who was the woman laying on the ground symbol of the maternity hospital terrorist attack?

By Sakina Amiry for EtilateRooz
Translated by Hazara International

Few hours after the start of the terrorist attack at the maternity ward of the 100-bed hospital in Dasht-e Barchi, a photo of a woman laying on the ground while holding a baby in her arms, went viral on social media. This photo shows a woman in hospital clothes laying on the ground with a baby in her arms. She was apparently killed during the clash and fell on the ground of one of the hospital’s rooms.
Her left-hand lies lifeless on the ground, while a rivulet of blood is reddening the floor. In her right arm, the mother is still holding her baby tight. 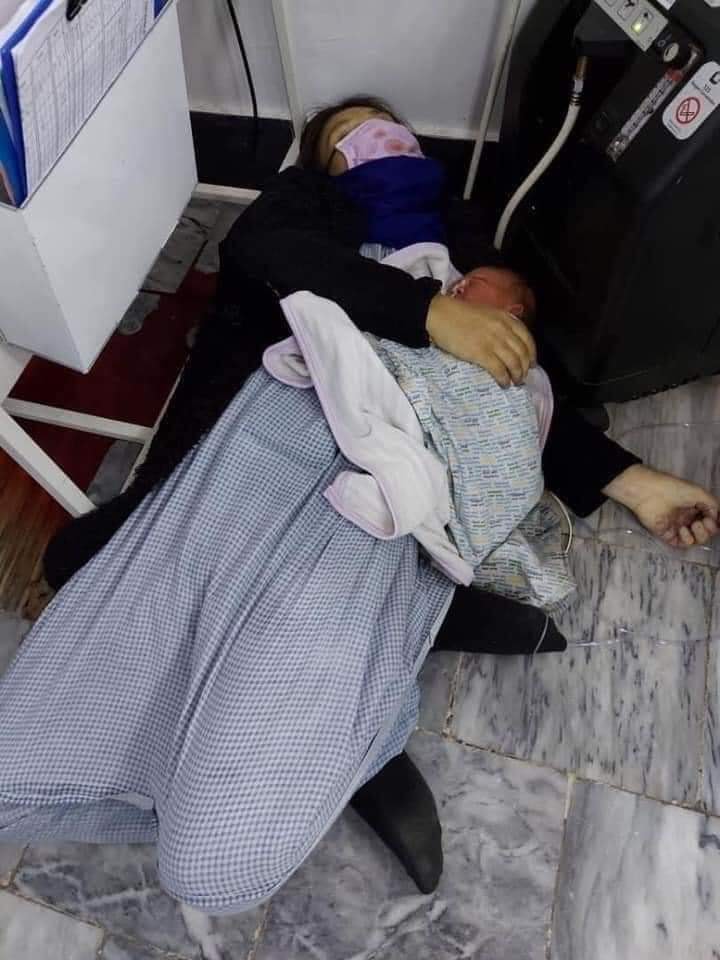 This photo shows Sarah and her newborn child. The mother had come to Kabul from Daykundi because she wanted to have safe childbirth, but an hour after the birth, armed assailants took her life, marking her first and last trip to Kabul. She is one of the 24 victims of the attack against the 100-beds hospital of Dasht-e Barchi.

Where did she come from?
Sarah was a member of a family of twelve. She lived with her low-income husband’s family in the Miramur district of Daykundi Province.
The family was soon going to enlarge thanks to the arrival of Sarah’s baby. Sarah left Daykundi for Kabul because she wanted to have better assistance and safer childbirth. “In Daykundi, the midwives told my wife that she had a health problem and that she had to reach a good hospital in the city as soon as possible because they could not do anything to ensure the child and mother’s health,” said Rahmatullah, Sarah’s husband.

He added that after consulting with the other family members, it was decided that Sara would have come to Kabul and give birth in a capital’s hospital. “Finally, we came to the conclusion that Kabul hospitals’  facilities are far better than those in Daykundi, so I asked her to come to Kabul.”
So Sarah took the road to Kabul. To save her daughter’s life in that 18 hours long journey. After 18 hours sitting on the back of a car, Sarah arrived in Kabul hosted for a week by her uncle’s family.
“The uncle’s house was in Kabul, and Sarah stayed there during that time,” said Rahmatullah. The uncle’s house is close to the 100-bed hospital situated in Dasht-e Barchi. The uncle’s family assured him that this was a well-equipped hospital run by foreign doctors.
On Tuesday, May 12 at 7:30 a.m, Sarah was brought to the hospital to deliver her baby. Just as everyone was waiting for good news from the hospital, some armed assailants stormed the hospital maternity ward, taking the lives of 24 people, including Sarah’s one, and marking with grief the survivors’ lives.

Dense smoke
Around 10 a.m, while Rahmatullah was praying for his wife and daughter’s health outside the hospital, armed assailants attacked the hospital. “Men were not allowed to enter the hospital and I was waiting outside when I have heard the sound of gunfire”.
Rahmatullah explains that after the thick smoke started to rise from the hospital’s courtyard and the sound of gunfire increased, his life started to fell apart.
In the attempt to find his wife, he started to walk around the hospital several times with the hope to find her at one of the hospital’s gate.
“After that, there was a lot of gunfire, people said they were pulling out the patients and I was looking for my wife.”
Having failed to find his wife in the hospital, Rahmatullah headed to another hospital where the patients and injured had been transferred. But at five o’clock in the evening, his search suddenly ended when he received a phone call from the coroner. “They called me on the phone and told me: condolences, your wife became a martyr. Tomorrow, bring a copy of her ID card and come to take her body from the forensic medicine department.”
It has been almost a week since this terrible tragedy happened, and Rahmatullah’s voice suddenly broke when he recalled the moment he has found his wife in the forensic medicine department. He never cried, but his long pauses while talking to me on the phone indicated a deep pain.

A mother of two children
Sarah was not only the mother of their two children, but she was also her friend: “My life was Sarah and she has been taken away from us. I am left with a boy who is still in shock at his mother’s death, and with a baby, whose condition and location I am still unaware of.”
Sarah was 26 years old. In 2017 she graduated in psychology from Bamyan University. Her hope was to be able to change the lives of many women in her deprived province and make her own life better. But after marriage, she had a son. Raising her child and building a better future for him and her family became Sarah’s dream.
“We were both working to create a better future for our children,” says Rahmatullah. He left Daykundi to support his family and for some time he lived in Kabul where he worked as a construction worker earning 250 afghanis per day.
He grieves that for those few money he couldn’t have been with his wife in her last days of life. Sarah’s body is now lying in Daykundi, but no one knows anything about her daughter in Kabul. Rahmatullah considers the baby girl as her mother’s legacy.

On Tuesday morning, Sarah was brought to the maternity ward of the 100-bed hospital to give birth. She was in severe pain. The doctor was barely able to open a medical file for her in the first room, that Sarah gave birth.
Sarah was in a room with other women who had just given birth when the terrorists entered the maternity ward. The assailants opened the fire against Sarah, 21 other mothers, two babies, and a nurse.
Dr. Atiqullah Qate, head of the hospital, told to EtilateRooz that the hospital was as crowded as any other Tuesday, and no one would have ever thought that an attack would have threatened the lives of mothers and babies.
Sarah was among the first victims. One week after the attack no one knows the fate of the child who was in Sarah’s arms. Sarah’s family and all her relatives have been searching for Sarah’s child during all this time. “My brother’s dear daughter has been killed and her husband was busy with her funeral, but we looked for the baby, unfortunately, we couldn’t find any trace.”
Hassan added that he went to the Ataturk Hospital, where all the babies had been transferred after the attack. But there the officials didn’t give him any information about the baby. “We were told that no patient had been registered at the hospital with that name. How is it possible? Sarah’s child was born in the hospital of Dasht-e Barchi, and now the officials here at the Ataturk hospital have to give us her baby, dead or alive, to ease at least a little of our pain.”
Meanwhile, Dr. Atiqullah Qate, head of the 100-bed hospital in Dasht-e Barchi, said that Sarah, daughter of Mohammadyar, was one of the martyrs who died after giving birth, but he did not know anything about the child’s fate: “Unfortunately, Sarah is one of the martyrs. Her name is recorded in the first room, but we don’t know anything about the child’s gender or what happened to the baby.”
Rahmatullah said his wife had a daughter. “They had a medical file about Sarah and we already knew that our baby was a girl. I was busy with Sarah’s funeral, and I couldn’t look for my daughter, but now I’m looking for a car to come to Kabul.”
After finding his wife’s body, he traveled back to his home in Daykundi, and now he has to wait one week for a car that will allow him to return to Kabul and looking for his daughter: “When I saw Sarah’s body I forgot everything.”
Rahmatullah’s voice is cut off with sadness and only after a long pause he is able to continue: “I was in Daykundi when I remembered that Sarah had had a daughter. Now there are no cars that leave for Kabul and I can’t go to look for our child. “She might fill the emptiness left by her mother’s death”

Sarah’s lost, child
Bismillah Ranjbar, a member of the Committee for the newborns’ surrender to their Families, told EtilateRooz that after the attack, a large number of families had gone to the Ataturk Hospital to take the survived children, and all of them claimed to be family members of the babies. Which made it really difficult to find the real families.
A Committee for the newborns’ surrender was set up to hand over the children to their families, all on the basis of documents: “Hundreds of people came to ask for the children. Everyone claimed to be their families. Some of them even tried to kidnap the babies. This has made the process of identifying the main families difficult.”
Mr. Ranjbar explains that all babies have been assigned to their original families on the basis of documents received.
Twenty children have been taken from Ataturk Hospital. Over the past week, the families of the surviving children have taken 19 children, but by Sunday May 28 a parentless child had been hospitalized in Ataturk Hospital, and many families claimed that the child belonged to them. Finally, the real family of the twentieth child was found on Sunday. She was not the baby of Sarah and Rahmatullah
Members of the Committee added that all the infants have been handed over to families who had credible documents and the entire process has been quite transparent.
Where is Rahmatullah’s baby now? No one knows, and Rahmatullah’s greatest wish is to find her. His child, the last trace of his beloved wife, the only solace to the pain of her unbearable absence.