Another Bystander to the Hazara Genocide

By Tamana Attai
0 226 0
The American legacy of conflict in the guise of “peacemaking” in Afghanistan has led to a never-ending war, eighteen years of invasion, 2 trillion dollars spent, 157000 Afghans (43000 civilians) and 2400 American soldiers killed, and now 150000 soldiers on-the-ground. [1]Today, the Taliban is stronger, opium production has skyrocketed by 80 percent, minorities and women have been marginalized through institutional discrimination, and the majority of Afghans live in poverty. The results of America’s longest war suggest the collective failure of the US and the international community in bringing peace with a budget of $2 trillion dollars. Wrong policies and statistics such as enabling and supporting one ethnicity and corrupt leaders and publishing erroneous demographical data have added to the chaos and instability and disproportionately affected ethnic minorities, especially the Hazara community which is ethnically and denominationally distinct from the other communities in Afghanistan (Hazara’s are majority Shia and Mongol in origin).

In particular, the recent demographic report published by the State Department on Hazaras, not only uses incorrect statistical data, but it also puts Hazaras and other Shia minorities in a vulnerable position. Moreover, the U.S. Embassy’s 2011 international religious freedom report states the following: “Reliable data on religious demography is not available because an official nationwide census has not been conducted.” [2](2011 Report on International Religious Freedom: Afghanistan). It is not only the US that is providing inaccurate data. Other agencies and embassies like the Australian Embassy and The Swedish Committee for Afghanistan also add to the inconsistency of statistical data on Afghanistan’s Hazara demographics.[3][4] The Hazaras themselves have estimated their population up 25 percent. Why do Hazaras have no say in Afghanistan’s presumptive census? Since most local and international data-gathering in Afghanistan currently lacks accountability, there is a real risk that the data provided is inaccurate, and furthermore, undermines ethnic groups?

The Reports on International Religious Freedom provided by the US State Department is inaccurate and inconsistent — overestimating the Pashtun population. [5]The Hazara population are not on board with the Department of State’s statistical data and as a sign of protest, Hazaras have launched a twitter campaign on “#Whatstatisticswith.” to excoriate the State Department’s report on the Hazara demographics. (Twitter).

Afghanistan’s last census was conducted in 1978. Since then, the Afghan State and the international actors have not been able to facilitate another census that reflects the true population of Afghanistan. However, international donors like the United States have been publishing annual reports over the past decade about Afghanistan’s religious demographics, where the data is often based on the assumptions and interests of domestic actors with vested interests such as Pashtun employees. Therefore, a number of former employees of USAID, UN, and UNICEF in Afghanistan said that most international and U.S. run NGOs have more than 70 percent Pashtun employees, who have no knowledge nor necessarily an interest in capturing the totality of Hazaras. Moreover, Abdur Rahman Ghafoori — the former Director of Census in Afghanistan — recently stated, “Census is all math, and the population counting runs on specific mathematical logarithms, and that particular logarithm is complicated”[6]. Importantly, these quantitative factors are controlled by the dominant actors in Afghan politics — the Pashtun majority–who are largely responsible for the input and design of the logarithms to conduct and process any census, as well as much of the data collection

For example, the report on Afghanistan’s religious demographics published by the American Embassy in Kabul since 2011 has been discrepant because it is based solely on estimates. Observers estimate that 80 percent of the population is Sunni Muslim, 19 percent Shia Muslims, and one percent other religious groups such as Sikhs, Hindus, and Christians. (2011 Report on International Religious Freedom: Afghanistan). The US state department reports from 2011, 2012, 2013, and 2014 emphasize the fact that there is no reliable data on the religious demographics of Afghanistan. Furthermore, the U.S. Embassy clearly states that Shia Muslims are about 19 percent of the whole population. But, in their 2015 report, the percentage of Shia Muslims (mostly Hazaras) drops down to 10–15 percent with no explanation. As the U.S. Embassy in Kabul says in their 2015 annual international religious freedom report, “The U.S. government estimates the total population at 32.6 million with Sunni Muslims comprising 85- 90 percent of the population, and Shia Muslims making up 10–15 percent of the population. The Shia population includes Ismailis and a majority of ethnic Hazaras.”(2015 Report on International Freedom: Afghanistan)[7]. Yet, again there is no insight into why we see this almost 50% drop in the estimates of how many Hazara currently reside in Afghanistan.

These annual reports reveal that the statistical data provided puts Hazaras at risk of perpetual genocide. The US and the international community are just bystanders to the Hazaras genocide as they were to the 1994 Genocide of Rwanda.[8]However, the estimation of Afghanistan’s religious demographics changes every year. If statistical data is inconsistent and inaccurate, what is it? Is it a way to protect the Pashtun hierarchy or to continue the racial erasure — even extermination — of Hazaras? 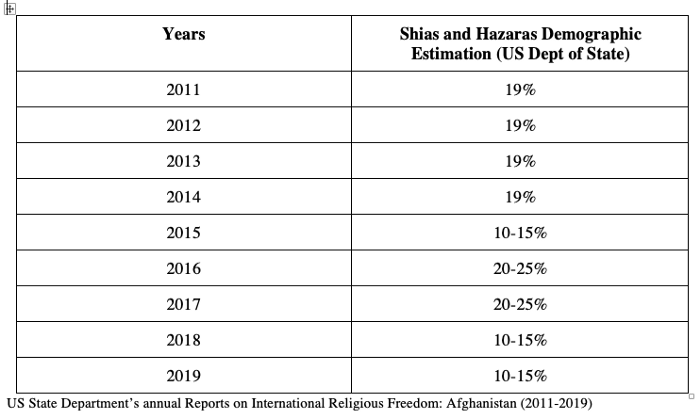 The Hazaras have openly expressed their disappointment with the U.S. State Department and the U.S. Embassy in Kabul’s most recent statistical data on Hazaras demography, and the diaspora community has launched a twitter campaign called “#Whatstatisticswith” to condemn the incorrect statistics issued by the State Department. The severity of the error in the demographics have also been pointed by the Second Vice President of Afghanistan (Sarwar Danish); with him stating, “The statistics published by the @StateDept, mentioning Hazaras and Shias making up to 10–15 percent of the population of Afghanistan, does not indicate the real percentage of the Hazaras and Shias population. If there is a reliable source, then they shall announce it”. It is not only the second vice president who asks for the sources and the reliability of the data; the entire Hazara nation wants more accountability in official record-keeping within Afghanistan and various donors who operate within its borders. In another tweet, the Chairman of Hazara World Association commented, “A campaign has been launched to protest the State Department’s erroneous statistics on Shia population #Afghanistan, @StateDept. @SecPompeo @USEmbassyKabul #Whatstatisticswith” (Chairman of World Hazara Council WHCOrg).” He, along with many other Shias and Hazaras, emphasizes the inaccuracy of the data; highlighting how a majority of Hazaras want the State Department to either publish their sources or to prevent the publication of inaccurate and inconsistent data.

Publishing this data is not costless. In fact, it may lead to the ultimate cost of people’s lives. The US along with many other local actors may contribute to perpetuating what in many respects is an ongoing genocide against the Hazara community and continue to validate Pashtun dominance in Afghanistan at the expense of other groups such as the Tajiks and Uzbeks.[9] The problematic estimation of the Shias and Hazaras by the U.S. Department of state not only shows the poor quality of data collection when it comes to the Shia and Hazara populations in Afghanistan but may also lead to unjust policy vis-à-vis minority communities on the ground This injustice has mobilized the Hazaras to hold the U.S. State department accountable for inaccurate data if the Afghan government won’t do the same. It also raises the question of what other contexts the US government and other aid agencies release doctored or inaccurate data on local demographics. At a time when the US itself wrestles with difficulties conducting its 2020 Census and concerns that minority groups will be undercounted, it is imperative that the US holds itself and its diplomatic corps to higher standards. Otherwise, it risks being party to officially sanctioned genocide in Afghanistan. I will let you decide why Hazaras?

[3] In a 2019 Report the Australian Embassy reported as follows: “Most sources agree that Pashtuns are the country’s largest ethnic group at approximately 40 per cent, with Tajiks second at approximately 25 per cent). Hazara and Uzbeks are the other major national ethnicities, with each constituting approximately 10 per cent of the overall population.”

[4] The Swedish Committee for Afghanistan says, “About 15% of the population are estimated to be Shia Muslims (Jafaris) and a few percent adhere to Ismailism (a branch that developed in the 700s). Most Shiites live in the central parts of the country, as well as in the west and in cities like Kabul, Mazar-i-Sharif, Herat and Ghazni. The largest group is Shia Hazaras, but there are also Sunni Hazaras. There are also Shiites, among several other ethnic groups, among others the Tadjik and the Pashtun. The largest group is the Shia Farsiwan in Herat Province.”

[5] One of the local news agency in Kabul published a statement as follows,”#Whatstatisticswith. At the 2001 Bonn Conference, the Hazara population in Afghanistan was estimated at 19 to 20 percent of the country’s population. Meanwhile, the report of the US department of State, which was published on June 10, 2020, the Hazara population was wrongly written as 10–15 percent of the total population of Afghanistan, while in addition to Shia Hazara population, Sunni and Ismaili Hazaras are not included in the statistics. This is why the protest campaign against the false statistics on Hazaras given by the US Department of State has been initiated. We will start protesting in cyberspace, especially on twitter.” (Muhajir TV)

[8] “So far people have explained the U.S. failure to respond to the Rwandan genocide by claiming that the United States didn’t know what was happening, that it knew but didn’t care, or that regardless of what it knew there was nothing useful to be done.” (Samantha Power, The Atlantic)

[9] Kamran Mir Hazar (Journalist) says, “Such falsified information about the Hazara is too much, mainly provided by Pashtunist governments and Pashtun agents of CIA. Any information about the quantity of the ethnic groups is not reliable and cannot be the source for research or actions such as the distribution of international aids to so-called Afghanistan.” (Kabul Press).