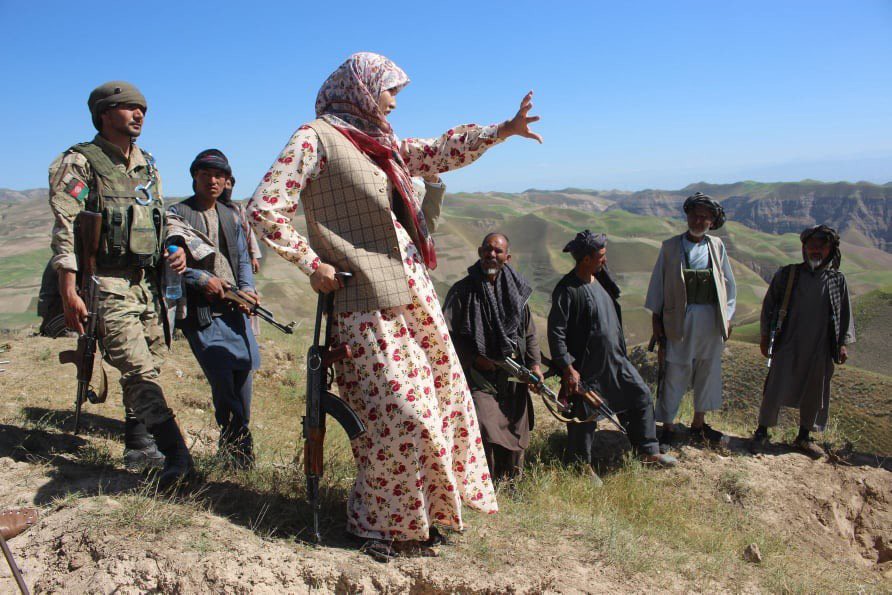 Salima Mazari, former governor of Charkint, with her personnel near the frontlines against the Taliban

Since the foundation of modern Afghanistan, Hazara have been subjected to forced displacement, genocide, and even slavery at the hand of the Afghan State[1], and more recently of the Taliban and so-called ISIS.

In the past few months, we have witnessed the bravery and determination of Panjshir’s resistance, a region turned into a beacon of hope against the Taliban’s oppression and invasion.

It would therefore be easy to wonder why Hazara are currently not taking part in a cohesive struggle of this kind, but to understand why that is so, and if this is really the case, we must consider some socio-historical facts.

After the fall of the first Taliban regime, Hazara have been among the most strenuous supporters of democracy and education, seeing in these values an opportunity for redemption and participation in the reconstruction of a country from which they have been mostly excluded.

In a few years, it became clear that all their hopes would have remained unfulfilled. While a marginal involvement of Hazara in State affairs has been allowed, the Afghan institutions and the same Afghan society were still permeated by anti-Hazara sentiments.

Their commitment to education has been seen as a threat by some public Afghan figures. Famous are the words of the current Taliban Minister for water and energy Farouq Azam who said:

“This year, 6500 Hazara from Daykundi took part in the university entrance exam, but from the great and historic Kandahar, only 2100 people took part in the same exam. We cannot tolerate this anymore.”

Clearly, the rhetoric of an Afghan united nation where all the citizens are equal and benefit from the same rights failed every time that Hazara threatened the status quo of those who consider themselves the legitimate and only rulers of the country.

In front of the institutionalized discrimination that once again prevented them to enjoy equal rights, Hazara chose the peaceful tool of protest. Most of these protests have been suppressed violently by the State and by terrorists whose affiliation with elements of the former government should be a matter of a serious investigation.\

When the State not only failed to protect its people but sided with their oppressors, some Hazara chose to physically defend themselves. Their struggle has been met with the violence of the State and with a very strong smearing campaign by many Afghan journalists and public figures.[2]

When Hazara areas have then were subjected to some of the most horrific terrorist attacks in the history of Afghanistan that targeted mostly schools, educational centers, mosques, and maternity hospitals, not only the Afghan government didn’t do anything to prevent or investigate these crimes, but a systemic effort has been made by some international media, and even by some researchers and human rights defenders to erase the victims’ identity, failing to understand the genocidal nature of these attacks and therefore unwillingly contributing to the plight of a community already in danger.

Therefore, it would be easy to look at the past few months and conclude that Hazara are not willing to fight for their freedom and survival but this would be historically non-factual.

Since the beginning of the modern Afghan state, Hazara have fought and survived the genocidal attempt of the Afghan State before and of the Taliban and so-called Isis more recently. They have done so through different means, facing multiple enemies and threats and with virtually no allies or support.

If mistakes have been made, these have been more acts of misjudgment and good faith rooted in hope and in the false promises of an international community that spent years promoting universal values and rights, just to end rewarding those who violently fought their way to power. Victims have been granted sympathy, to their perpetrators, deals, and concessions.

The lack of allies and leaders able to support this community should not be mistaken for weakness. Taking part in peaceful protests knowing that most likely these will be targeted by terrorist attacks, answering to the terrorist attacks against schools financing scholarships and sending sons and daughters to schools despite the dangers, not giving up despite everything for decades, and keep advocating for their rights and recognition, are nothing but heroic acts of resistance. A resistance that doesn’t exhaust itself in the legitimate armed defence but that permeates the very same history of a community that is the embodiment of resistance.